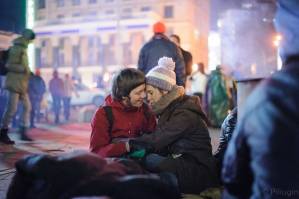 A Road Control journalist and his lawyer, as well as the photographer whose graphic pictures of police brutality on Nov 30 gained wide coverage remain in custody on questionable charges.  With their arrests having followed those of 9 people who almost certainly had nothing to do with the Dec 1 disturbances on Bankova St, the intended message seems worryingly clear.  Thus far Ombudsperson Valeria Lutkovska has chosen to focus only on whether the disturbances themselves constituted peaceful protest, ignoring serious grounds for doubting that the right people were arrested.  At the same time it seems possible that the president’s words last week about an “amnesty” could result in gravely flawed criminal charges against peaceful protesters, journalists and a lawyer simply being dropped along with any prosecution of those who savagely beat defenceless protesters on Nov 30 and Dec 1.

The photo above is from 30 Nov this year.  It was taken shortly before Berkut riot police turned up and began brutally beating peaceful protesters with truncheons  The photographer, Oleh Panas also filmed the attack and bloodied protesters and sent his photos to Reuters.  He is now in a Kyiv temporary detention facility, and has been remanded in custody for 2 months.  The charges – of organizing and taking part in riots - pertain to the disturbances outside Bankova St on Dec 1.  Panas’ father asserts that his son was not even at the demonstration on Dec 1, having been injured during the Berkut attack the previous morning.

His lawyer, Tetyana Kozachenko, has lodged an appeal against his detention.  In the last few days over 100 journalists, artists and civic activists have formally offered to stand as guarantors for Panas’ release from custody.  The list of people and major media publications that have come out in Panas’ defence is formidable.

Panas was arrested on Dec 9 in Lviv and taken to Kyiv.  His lawyer was not allowed to see him before the court hearing which remanded him in custody.  The only witnesses in the case are law enforcement officers, probably the same Berkut riot police who can be seen on video footage beating anybody who crossed their path as they charged, then later people on the ground showing no resistance.

Panas’ arrest came four days after that of Road Control journalist Andriy Dzyndzya on identical charges.  Dzyndzya was on Bankova St, but is adamant that he was there in his professional capacity.  He too was remanded in custody for two months.

Dzyndzya’s lawyer, Viktor Smaliy was also not allowed to see his client for some time, and again the case against the journalist appears to be based solely on testimony from the law enforcement officers.  Since these officers can be seen using excessive force, and there are serious grounds for suspecting that the disturbances were orchestrated, their testimony must be backed by objective evidence. It is not.

A particularly disturbing development came with the arrest and remand in custody for 2 months of Smaliy.  He is now accused of “attempted murder” which purportedly took place after the judge, Volodymyr Buhil announced that he was remanding Smaliy’s client,  Dzyndzya in custody for 2 months.  On Dec 14 Smaliy declared a hunger strike in protest at his detention.

The release from custody of 8 out of the 9 original “Bankova Prisoners” who were first beaten up by Berkut riot police, then remanded in custody for 2 months on suspicion of “organizing riots” is to be welcomed but this is only an interim achievement with most of the criminal proceedings continuing.

Three men whose detention arouses no less concern remain behind bars.  On Dec 10 Human Rights Ombudsperson, Valeria Lutkovska controversially suggested that the right to peaceful assembly had not been infringed during the events on Bankova St on Dec 1, since what happened could not be called a peaceful gathering.  She advised people to not fuel “hysteria” over the events. The disturbances outside the president’s administration were certainly not peaceful, however Lutkovska failed to take into account serious grounds for doubting that the people detained were involved in the disturbances. It must also be asked why the riot police pushed people into the courtyard, beat up men lying on the ground and paid no heed when journalists showed their press ID.   The number of rights infringed is considerable, both in the case of the three men still in detention and those of the 9 men seriously injured by Berkut officers.  Any blurring of that fact and concentration on whether a protest is peaceful or not will provide backing for those hoping to use detainees as bargaining tools to avoid properly investigating and punishing those guilty of serious brutality and other violations.