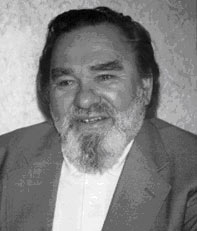 Mykola Rudenko was born on 19 December 1920 to a miner’s family in the village of Yuryevka, the Lugansk oblast. He early lost his father, who perished in the mine in 1927. The family with three children decided to go in for agriculture. All of them worked hardly, but in a year the land and the cattle were passed to a kolkhoz, which Rudenko’s mother had to join. The famine of 1932-33 was never forgotten by Mykola. At the age of eight because of a trauma the boy stopped to see with his left eye.

He began to compose verses in his childhood, some of them were printed in newspapers for pioneers. M. Rudenko won a competition and got a scholarship from the Ministry of Education; thanks to that he entered the philological faculty of Kyiv University in 1939, but studied there only for two months. Rudenko entered the Communist Party in 1939 after finishing the secondary school, at the mine, where his father had worked. In 1939 was recruited to the army (he concealed that he could not see with one eye). On 4 October 1941, in the first battle near Leningrad, he was seriously wounded with an explosive bullet, which shattered the bones of pelvis and spine, and stayed in a hospital for a year. Doctors did not hope that Rudenko would be able to walk again, but he managed to recover. He was appointed a political instructor (politruk) of a near-front hospital. Rudenko got the Order of Red Star, the Order of Patriotic War of the 2nd grade and six medals. After the demobilization in 1946 he did not return to the university. In 1947 the collection of verses «Z pokhodu» («From the march») was published, and Rudenko was accepted to the Union of Ukrainian Writers (UUW). He worked as an executive secretary in the publishing house «Radianskiy pismennik», was an editor of the magazine «Dnipro», the secretary of the Communist Party committee of the UUW, a member of the Kyiv city committee of the Communist Party of Ukraine.

For the first time he demonstrated the disobedience in 1949, when, under the pretext of criticizing «cosmopolites», the authorities crushed the Jewish writers. They demanded negative characteristics on such writers from Rudenko, who was the party secretary of the UUW, but he, being a gentle and benevolent person, firmly refused to fulfill the order, which, to tell the truth, did not facilitate the lot of the victims. Yet, in 1950 Rudenko was fired from all ruling positions, thus loosing all the privileges of the Soviet nomenclature. Nevertheless, «For a long time I remained a conscious party member», he said later in an interview, «I believed too much in the great affair of the Communist Party, I was a faithful Stalinist, I wrote many verses dedicated to our leader, I wrote even a long poem about Stalin».

Dethronement of the «personality cult» of Stalin at the 20th Congress of the CPSU made a terrible impression on Rudenko. He understood that the root of the problem has been not in Stalin; if a paranoiac and a sadist could head the state and party for so many years, then the doctrine laid in the basis of the state was deeply wrong. Studying the «Capital» by K. Marx convinced Rudenko that the Marxist doctrine was wrong at its fundamentals: in the understanding of the theory of the surplus value. This value is not created by the super-exploitation of workers, but by the solar energy (photosynthesis), adjusted with the labor of peasants and their cattle. Rudenko described his understanding of this problem in the philosophic works «Ekonomichny monologi» («Economic monologues», appeared in samizdat in 1975), «Energiya progressu» («Energy of progress») and in the novel «Formula Sontsia» («Formula of the Sun»).

In 1974 M. Rudenko was expelled for the Communist party, and in 1975 -- from the UUW. He had to sell his car and country house and found a job of a watchman.

In the early 70s Rudenko began to take the active part in the protection of human rights, including the national ones. He had close relations with Moscow dissidents, was a member of the Soviet branch of Amnesty International. On 18 April 1975 he was arrested for human rights protection activities, but was released during the investigation as a participant of the WW2 (this amnesty was connected with the 30th anniversary of the Great Victory).

In February-March 1976, when Rudenko tried to restore his invalid pension, he was coerced to the psychic examination in psycho-neurological hospital for war invalids. Only thanks to doctors’ decency he was not put to the lunatic asylum.

On 19 November 1976, after the consultations with P. Grigorenko, O. Meshko, O. Berdnik, L. Lukyanenko, I. Kandyba, O. Tykhiy, M. Matusevich, M. Marynovich and N. Strokata, Rudenko conducted a press-conference for foreign journalists at A. Sakharov’s flat in Moscow. At this press-conference he declared about the creation of the Ukrainian Helsinki group (UHG). In the same evening some people threw stones at the windows of Rudenko’s flat in Pushcha-Voditsa near Kyiv. O. Meshko, who spent the night in the flat together with Rudenko’s wife Raisa, was wounded in shoulder. In such way the KGB «saluted» the creation of the UHG. Soon Rudenko published the UHG Declaration and Memorandum No. 1. In the section «Typical violations of human rights» of the Memorandum he made public the data about the famine of 1932-33, the repressions of the 30s, the UPA destruction, the repressions against the figures of the sixties, the list of political concentration camps and Ukrainian political prisoners.

On 23-24 December 1976 M. Rudenko’s flat was searched; during the search 39 USD were stealthily put by the KGB. On 5 February 1977 he was arrested in Kyiv and sent by plane to the Donetsk preliminary prison, where the criminal case was started against him and O. Tykhiy. (The permission for the arrest of Yu. Orlov, M. Rudenko and T. Ventslova, the leaders of Moscow, Ukrainian and Lithuanian Helsinki groups, was given by the Political Bureau of the CPSU after the petition of P. Rudenko, the General Prosecutor of the USSR, and Yu. Andropov, the head of the KGB).

The trial was held on 23 June-1 July not in a courtroom, but in the «Lenin’s room» of the «Smeshtorg» office in the town of Druzhkovka of the Donetsk oblast. There were «procedural grounds» for this: O. Tykhiy had been born and lived in the vicinity. The signboard was removed from the office. The questioned witnesses were sent away from the improvised courtroom. One of the witnesses of the accusation was professor Illya Stebun, who once had been defended by Rudenko from accusations of «cosmopolitanism».

M. Rudenko was condemned by the Donetsk oblast court, according to Article 62 part 1 of the Criminal Code of the UkrSSR, to 7 years of strict regime colony and 5 years of exile. His publicist essays, fiction and oral sayings were qualified as slanderous. For example, about «Energiya progressa» the verdict stated that this was an «inimical work, since it contained insinuations against the Soviet administrative and social structure», the author of which «made the attempts to discredit the revolutionary achievements of the Soviet people and its vanguard – Communists». The verdict did not contain any proofs that Rudenko had the intentions to undermine the Soviet regime.

In 1978, by the special order of the UkrSSR Glavlit (state censorship committee), Rudenko’s creations were withdrawn from circulation (libraries and shops) – all in all 17 titles.

M. Rudenko did his term in colonies ÆÕ-386/19 (the settlement of Lesnoy) and ÆÕ-385/3 (the village of Barashevo, Mordovia). At first, since Rudenko was a 2nd group invalid of the WW2, he was not driven to hard physical works. At one of meetings with his wife Rudenko passed some verses at large, and after this, in September 1981, he was transferred to the camp ÂÑ-389/36 situated in the village of Kuchino, the Chusovskoy district of the Perm oblast.

On 5 May 1978 Raisa Rudenko held the demonstration near V. Lenin library in Moscow with the slogan «Release my husband, WW2 invalid M. Rudenko!» On 15 August 1981 Raisa was arrested for the work in the UHG and the protection of M. Rudenko. She was condemned according to Article 62 part 1 of the CC UkrSSR to 5 years of strict regime colony. She stayed in the women camp ÆÕ-385/3, the village of Barashevo, Mordovia.

M. Rudenko was often put to the punishment block for participation in prisoners’ strikes, tearing off the strips with his name and refusal to work. The head of the colony said: «You have lost the right to be called a 2nd group invalid of war». The colony administration qualified Rudenko as a 3rd group invalid and began to send him to hard works.

On 5 March 1984 Rudenko was sent to the place of his exile, the settlement of Mayma of the Gorno-Altaysk autonomic oblast. Three years later, having finished her term, his wife joined him. Rudenkos were released in December 1987, but it appeared that they had no place to return: their apartment in Kyiv had been confiscated after the arrest of Raisa. In the end of 1987 M. Rudenko and his wife left for Germany and then for the USA. He worked at the radio stations «Liberty» and «The Voice of America». In 1988 M. Rudenko was deprived of the Soviet citizenship. He headed the Ukrainian representation of the UHG.

In 1998 the Philadelphia educational-scientific center acknowledged Rudenko to be «Ukrainian of the year» for steadfastness in the protection of national rights and culture of the Ukrainian people. M. Rudenko was a member of the PEN-club. In 1990 he was elected as a Full Member of the Ukrainian Free Academy of Sciences (USA). He got the literary premium of the Ukrainian foundation of culture named after V. Vinnichenko (1990).

In September 1990 M. Rudenko returned to Kyiv. His citizenship was returned, and he was rehabilitated.

In 1991 his right eye also became blind, but six months later he began to see with the left eye, which had not functioned for 63 years.

In 1993 he got the T. Shevchenko literature state prize for his novel «Orlova balka» («The eagle’s ravine»). In 1996 Rudenko was awarded with the Order «For services» of the 3rd grade for great contribution to the development of the Ukrainian literature and for his human rights protection activities.

Secretariat of the Council of Ukrainian human rights protecting organizations