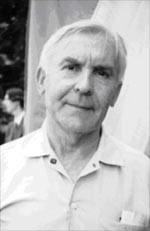 On 16 May 2004 Vasyl Striltsiv died in Ivano-Frankivsk.
Vasyl Striltsiv was born on 13 January 1929 in the village of Zagvizdia, the Tismenitsa district.
In 1944 he graduated from the 4th grade of Stanislav gymnasia and entered the 9th grade of the secondary school No. 3. Yet, on 7 December 1944 15-year-old V. Striltsiv was arrested by the NKVD and accused of the contacts with national-liberation movement. On 2 February 1945 he was tried by the NKVD military tribunal of the Stanislav oblast according to Articles 541 and 5411 of the Criminal Code of the UkrSSR («high treason») and was condemned to 10 years of incarceration. After stay in a number of colonies and transit prisons, in 1946 Striltsiv was transported to the Taymyr Peninsula, to the town of Dudinka (the Krasnoyarsk Territory), and later, in 1948, to Norilsk. For participation in the rebellion of the convicts of Norilsk in 1953 he got to the penalty camp, where he finished his term on 16 October 1954. Yet, he was left there as an exiled.
On 20 November 1957 Striltsiv returned to Stanislav and, after some difficulties, got the propiska in Zagvizdia. He worked as a house-builder; in 1959 he graduated from a secondary school and in 1965 – from the correspondence faculty of the Chernivtsy University. He specialized in English philology.
In 1962 V. Striltsiv was rehabilitated. He worked as a teacher in Ivano-Frankivsk and the town of Dolina. In 1972, when Vasyl’s brother Pavel was arrested and condemned after Article 1871 of the CC of the UkrSSR, the authorities began to persecute V. Striltsiv. In 1977 he was dismissed from his job because of a conflict with administration. On 17 September 1977 Striltsiv refused from the Soviet citizenship and sent his passport to the Presidium of the Supreme Rada of the USSR.
On 25 October 1977 Striltsiv joined the Ukrainian Helsinki Group. On 18 December of the same year he signed the appeal of the members of the Group to the Belgrade Council in the connection with the arrest of Levko Lukyanenko.
In 1979 Striltsiv was condemned to three months of compulsory work for «insulting of honor» of school superintendent (Article 126 of the CC of the UkrSSR), after the event that had happened in 1977.
In March 1979 a search was conducted in Striltsiv’s flat in the connection with the case of Oles Berdnik. The law-enforcers confiscated the Bible, some poems and the text of the verdict of 1944.
In May 1979 he got the warning about the responsibility for the anti-Soviet activities stipulated by the Decree of the Presidium of the Supreme Rada of 25 December 1972, but refused to sign this warning.
Another search of Striltsiv’s dwelling was carried out on 5 July 1979 and was connected with the arrest of Petro and Vasyl Sichkos, the members of the UHG. In October 1979 Striltsiv and Sichkos were summoned to the KGB, where they were warned: if something would happen on the day of celebration of the first anniversary of the new Constitution, they would be arrested.
On 23 October 1979 Striltsiv was arrested on the accusation of «violation of the rules of passport regime» (Article 196 of the CC of the UkrSSR), and on 12 November he was condemned by the Dolina district court to 2 years of incarceration in a colony of strict regime. Neither the dwellers of Dolina, where Striltsov had lived and worked for many years, nor his only relative, brother Pavel, knew anything about this trial. Only two law-enforcers in civilian clothes were present in the courtroom. There was not even an advocate there. After the trial, contrary to the demands of law, Striltsiv was not permitted to meet his brother. On 2 January 1980 he was transported to colony ÎÏ-317/16 situated in the village of Bozhkov of the Poltava oblast.
The day before the release, on 22 October 1981, Striltsiv was arrested in the colony for «anti-Soviet agitation and propaganda». On the day of the arrest a search was conducted in the house of Semenishin, a teacher of physical training, in the village of Vygoda, the Ivano-Frankivsk oblast; Striltsiv’s archive was confiscated during this search. On 21-28 April 1982 the Poltava oblast court condemned Striltsiv, according to Article 621 of the CC of the UkrSSR, to 7 years of incarceration in colonies of strict regime and 4 years of exile. He did his term in colony ÆÕ-385/3 in the village of Barashevo of the Tengushovskiy district, Mordovia.
Striltsiv handed the scores of protests and applications, and wrote the work «Education must serve to people» containing the analysis of the policy of russification. He was released on 5 May 1987 because of perestroika. He immediately confirmed his membership in the UHG. On 11 March 1988 Striltsiv, together with other 18 UHG members, signed «The appeal of the UHG to the Ukrainian and world community» about the resumption of work of the Group.
After his return to Ivano-Frankivsk Striltsiv refused to restore the Soviet citizenship until, in January 1988, he got the job of a teacher in the settlement of Zhukotin of the Kolomiya district. In 1990 he retired on a pension.
Vasyl Striltsiv was a founder-member of the All-Ukrainian Union of political prisoners and the repressed (3 June 1989), since 24 November 1991 he was the head of the oblast organization of the Union of political prisoners of Ukraine, which, on 19 December 1992, joined the All-Ukrainian Union of political prisoners and the repressed. On 3 May 1998 he became a deputy head of the Union. Striltsiv was an active member of the Ukrainian Helsinki Union (UHU), the head of the Ivano-Frankivsk town organizations of the UHU and the Ukrainian Republican Party.
Vasyl Ovsienko, after the materials by V. Striltsiv