IMMENSE DIGNITY IN LIFE AND DEATH 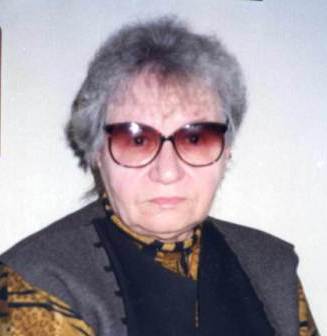 NADIYA SVITLYCHNA has passed away in her seventieth year. We have lost our most faithful and irreplaceable sister, our guide in adversity, and ally during the years of tyranny and persecution for free thinking.  She was a modest woman who by her very presence to a large extent defined the moral climate of the Ukrainian dissident milieu in the 1960s.  Without her it would be difficult to conceive of the phenomenon of those Ukrainian women who quietly opposed the vicious communist madness on our soil, retaining the customs within the family and faith in her heart. It was Nadiya Svitlychna who created a buttress of healthy sanity against the feverish Godlessness which tried to turn all that is most sacred into building material.

Her parents, rural workers from the Starobilsk district, in the Luhansk region, raised three children in honest poverty, and managed to give them all a higher education. Nadiyka began school from the second grade as she was already able to write a letter to her father at the Front. Childhood was “somehow forgotten”.  It was followed by her years at Kharkiv University, then teaching in the Donbas area. Like Vasyl Stus, she arrived in Kyiv in 1964 and found herself in a cultural oasis. She came to her brother, Ivan Svitlychny, and took part in literary evenings, singing groups on the banks of the Dnipro (river), trips to the Carpathian Mountains where she truly discovered Ukraine.  However the main thing in her life was her cultural and educational work and circulating truthful information. “We circulated samvydav [samizdat] as widely as we could, and acted as though we were doing it legally”.  It was in this that her ability to work untiringly became apparent, as well as her talent for helping and her commitment to people. In this she became very close to the artist Alla Horska and even worked with her on mosaics in Donetsk.  It was Nadiyka who washed her wounds and prepared her body for its final resting place.

They were like two Samaritans who, without yet knowing the Gospel, had turned to Christ , seeking the Water of Life.

It was from her brother that Nadiya learned tolerance in dialogue which was a skill she applied after her arrest in 1972, when she trained the investigators to speak with her in decent language, and also to write down in the protocol her response: “I will not answer that question on moral grounds”.

Of course this “luxury” had a high cost. She was put in cruel and desperate situations. They took her child from her and place him somewhere in a children’s home. After four years of harsh regime labour camp she faced harassment once again. And when they finally understood that no force would break her conscience, they flung her with two small children, and without the necessary documents, out of the country.

However there she found a “huge family”, “very many good people”. And she set to in her usual way, uniting isolated fellow Ukrainians for the sake of liberating their native land. They valued her stand, not purely political, and quite clear: “It would be beneath my dignity to remain a citizen of the world’s largest, most powerful and most developed concentration camp”.

Nadiya Svitlychna’s life was one, first and foremost, of constant and selfless work. Deciphering labour camp manuscripts smuggled out of the country, putting samizdat archives in order, preparing the manuscripts of Ivan Svitlychny, Vasyl Stus, Mykola Horbal and many, many others – all of this was by her efforts or with her unfailing participation.

Her name became well-known throughout Ukraine from 1982 when she was invited to make a series of programs about her “criminal case” on Radio Svoboda [Radio Liberty]. For a lot of people this would have been envisaged as some kind of extended autobiography. In Nadiya Svitlychna’s understanding, however, this was the tale of all Ukraine suffering repression, of its best people whom she had been honoured to meet in her choice of “the narrow path”.  Then she had her own regular radio program – “Journal of Hope[1]” which drew listeners from Ukraine, and not only.

Nadiya Svitlychna’s voice was heard on Radio Svoboda for twelve years and for many it was hard to imagine their life without that voice.

And here we would stress that this was the heartfelt, Christian voice of hope – to the indifferent, the disillusion, to those of little faith, to the weary and the yearning. In those years her voice gave hope and joy.

We became accustomed to Nadiya Svitlychna’s presence on the air as though to a promise of change for the better. The motto of the Svitlychny family’s Cossack past: “God grant us understanding” and “we will be”.

Nadiyka’s visits to Ukraine were not to any one person in particular – they were to us all. She was well up on “all her own”, on our lives, health, children – as though she had never left.

That is indeed what it means “to love your neighbour as yourself”.

She left this life with grace, tranquillity and bearing, preparing for that moment as custom demanded, and not losing her sense of humour to the end. She took her parting with all severe words “with God”, with faith that we are all equal, and that the order is not important.

And we will sing “Vichna pamyat” [“Eternal memory”] with abiding faith in every word.