Documenting war crimes in Ukraine.
The Tribunal for Putin (T4P) global initiative was set up in response to the all-out war launched by Russia against Ukraine in February 2022.
• Topics / Law enforcement agencies 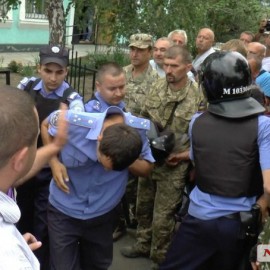 Two of the three police officers facing charges over the death of 32-year-old Oleksandr Tsukerman who was beaten and fatally shot while in handcuffs are now facing less serious charges on the grounds that it was not their savage beating that killed the young man, but shots 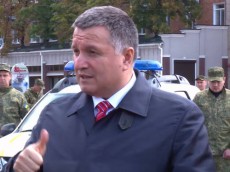 Vostok-SOS and other civic organizations have reacted with anger to remarks made on Friday by Arsen Avakov, Ukraine’s Interior Minister regarding Ukrainians displaced by the fighting in Donbas 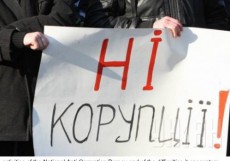 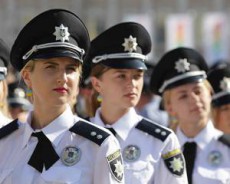 Press conference on the results so far, plans and problems encountered

Three police officers are currently in detention after a 32-year-old man was beaten and fatally shot while in handcuffs in the early hours of August 24.

Russia has long demonstrated that journalists, civic activists and all those who express independent views are at risk in Russian-occupied Crimea. On Thursday, there was a disturbing indication that the lawyers representing political prisoners may also be in danger.

The events on July 2 around the detention of former Aidar commander Valentyn Lykholit elicited widely divergent reactions and some worrying assumptions about what need not be considered in fighting ‘separatists’.

Newly-appointed Prosecutor General Yury Lutsenko has held a meeting with lawyers representing victims of crimes against Euromaidan. While it is definitely early days, the lawyers are obviously pleased at the moves Lutsenko has announced which may help to remove the sources of sabotage from within the Prosecutor General’s Office

Anton Zazymko, who is facing serious charges over an attack by Berkut officers on Euromaidan activists, has held onto a renamed, but similar post in a National Police special forces regiment. In a move viewed with anger by lawyers representing Maidan victims, the Kyiv Court of Appeal upheld the original rejection of the application for his suspension

Civic activists and Euromaidan victims’ lawyers have sounded the alarm about a major offensive against Serhiy Horbatyuk and his special investigative department. Several criminal investigations have been initiated against members of the department and Horbatyuk could himself be facing criminal charges for alleged ‘negligence’.

The National Anti-Corruption Bureau did not initiate criminal proceedings over flats obtained by Vitaly Kasko, a prominent reformer, anti-corruption campaigner and ex-Deputy Prosecutor General. This contradicts the impression given by the Prosecutor General’s Office which is seeking prosecution of Kasko, while claiming that data about the allocation of almost all other apartments has been ‘lost’.

Selective prosecutions as weapon in Prosecutor’s war against reform?

The good news that ex-Deputy Prosecutor General Vitaly Kasko has not been remanded in custody cannot remove the deep concern that an attempt was made to jail an outspoken critic of corruption and stalled reforms.

In what has been aptly described as “the latest disgrace from the Prosecutor General’s leadership”, an attempt was made late on Sunday evening to read out criminal charges against Vitaly Kasko, ex-Deputy Prosecutor General and prominent critic of corruption and sabotage of reform within the prosecutor service.

Relief that Viktor Shokin has finally been removed from his post as Prosecutor General was tempered on Tuesday by a final blow against the reform camp through the dismissal of David Sakvarelidze and criminal charges against his former colleague Vitaly Kasko, with concern mounting that Shokin’s successor may only differ in passport details.

The ever-obliging Pechersky Court in Kyiv has allowed the Prosecutor General’s Office to search and remove documents, etc. from the Anti-Corruption Action Centre. This, we are to understand, is how the illustrious investigators want to find US money allocated for reforming the prosecutor’s office

Maidan activists: Prove that Ukraine has changed through choice of Prosecutor General!

Relatives of Nebesna Sotnya, those killed during Euromaidan and civic activists have publicly demanded an end to behind-the-scenes bargaining and an open competition for the post of Ukraine’s Prosecutor General

It is one year exactly since President Petro Poroshenko put forward Viktor Shokin as Prosecutor General, a post Shokin controversially holds to this day

Ukraine’s police must not collaborate with Azov xenophobes

Xenophobic statements just issued by members of the Azov Regiment can only compound mounting concern over reported collaboration between police and Azov Civic Corps activists in the Kyiv oblast, as well as plans for groups of Azov fighters to "clean the streets" of criminals
1  2  3  4  5  6  7  8  9  10  » ... 29
x