Civic activists have marked the first anniversary of the sentences passed on Crimean filmmaker Oleg Sentsov and civic activist Oleksandr Kolchenko by handing down their own verdicts on the Kremlin and the investigators, prosecutors and judges directly implicated in that show trial. Real liability, however, remains largely theoretical

Imprisoned Ukrainian filmmaker Oleg Sentsov has written a powerful letter from Russian captivity in which he rejects attempts to free him and others at any price, saying instead to "use us as a weapon"

Shamil Kazakov was rejected for the Russian police service because he is a Tatar and Muslim. After making a video which included a taped conversation confirming such unconstitutional racism, it was he who ended up being prosecuted. 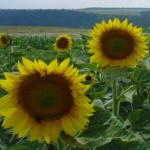 Ukraine is celebrating 25 years of Independence on August 24. The anniversary is poignant for so many reasons, but must be particularly painful for those Ukrainian political prisoners held in Russia or Russian-occupied Crimea. Please show them solidarity with a breath of Ukraine – a sunflower!

The Rostov regional court has rejected the appeal brought by Ukrainian political prisoner Serhiy Lytvynov against his 8.5-year sentence. The charges had been openly implausible and only laid after Russia was forced to withdraw the original ‘war crimes’ indictment, but unfortunately the ruling on August 9 was anticipated

Russia continues to torment Ukrainian it drove half-crazy through torture

Ukraine has repeated its request for the extradition of Ukrainian political prisoners Stanislav Klykh and Mykola Karpyuk, amid increasing concern for Klykh’s psychological state after torture in Russian captivity and as Klykh faces cynical new charges for supposed ’contempt of court’.

Please write to Valentin Vyhivsky who is turning 33 on August 3 in Russian captivity, after being abducted from Crimea in September 2014, held incommunicado, tortured and twice subjected to mock executions

Grotesquely flawed trials and proof of total innocence are not enough for Russian President Vladimir Putin, it seems. He needs ‘grounds’ why he should release Ukrainian filmmaker Oleg Sentsov, civic activist Oleksandr Kolchenko and other Ukrainian political prisoners.

Russian sentenced to forced psychiatric treatment for support of Ukraine

Punitive psychiatry appears to have returned in Russia with a recognized political prisoner being forcibly held in a psychiatric hospital. 36-year-old Alexei Moroshkin has been receiving psychiatric ‘treatment’ against his and his family’s wishes since December 2015, and a Chelyabinsk court has just extended his confinement for a further 6 months

A second Russian court has found Andrei Bubeev guilty of ’calls to violate Russia’s territorial integrity for reposting an article entitled “Crimea is Ukraine”, as well as of ’extremism’ for reposting a toothpaste tube with the caption “Squeeze Russia out of yourself”

Bloody Soviet dictator Joseph Stalin has not been relegated to the past in today’s Russia. Not if you judge by the offices of law enforcement officers and investigators, Ivan Pavlov, a human rights lawyer writes. He has to visit a lot of such offices, and says that one in two will have the tyrant’s portrait.

"How many divisions does the pope have?" Josef Stalin was meant to have asked contemptuously. Today the question could as easily be posed: How many companies does the Kremlin have?

Russia has criminalized not denouncing people, with terrifying implications for the many politically motivated and / or fabricated criminal cases against Crimean Muslims, Crimean Tatars and any Ukrainians opposing Russia’s occupation of Crimea.

Mike Downey, a film producer and the deputy head of the European Film Academy, spoke with RFE/RL about why Sentsov’s case remains important to people across Europe

Oleg Sentsov, the Ukrainian filmmaker held for over two years in Russian prisons, is turning 40 on July 13. The Kremlin has sent him and Oleksandr Kolchenko as far from Moscow and publicity as possible. It is vital we demonstrate that no distance will be enough and make greetings to the men and demands for their release resound

The verdict is in: accusing someone on Russian state television of being a Western spy with no evidence to substantiate the claim does not constitute slander -- at least if that someone is opposition leader Aleksei Navalny.

FSB descends on Ekho Moskvy over article on Chechnya

Russia’s FSB have carried out a search at the offices of the independent radio station Ekho Moskvy and removed electronic correspondence between the station and political analyst Andrei Piontkovsky. Several members of staff have also been summoned for interrogation

Veteran Crimean Tatar leader Mustafa Dzhemiliev is surely speaking for all Ukrainians in addressing birthday greetings to Russian Tatar activist Rafis Kashapov and his twin brother Nafis on their 58th birthday. For all, in fact, appalled by the monstrous sentence passed on Rafis Kashapov for social network posts criticizing Russia’s annexation of Crimea and aggression in eastern Ukraine.
« 21  22  23  24  25  26  27  28  29  30  » ... 118
x