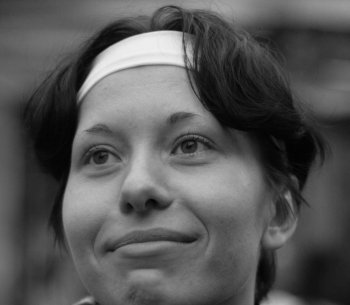 On Monday 26 January, the funeral was held in her native Sevastopol (Crimea) of 25-year-old Anastasia (Nastya) Baburova, freelance journalist for Russia’s “Novaya gazeta” who was murdered last week by a hired killer, together with prominent lawyer and human rights defender Stanislav Markelov.  Nastya’s parents travelled to Moscow on Saturday to bring their daughter’s body home.

The funeral took place in the St. Volodymyr Cathedral in Sevastopol and was attended by family, friends, former teachers and schoolmates.

Nastya was a dazzling student and after beginning her studies in Sevastopol, went to Moscow to study at the prestigious MGIMO Institute (Moscow State Institute for International Relations). However her striving for justice took over and she transferred to the Moscow State University where she studied journalism while also being involved in civic activity – she was a member of environmental and anti-fascist movements. .She worked freelance as a journalist, most recently for Novaya Gazeta, and particularly focused on investigating crimes committed by fascist gangs.

She is well remembered in her native Sevastopol, and the news of her murder came as a terrible blow. Ukraine’s President Yushchenko joined very many Ukrainians in expressing their sorrow and condolences to Nastya’s family.

And then there are the others ..

Nastya’s funeral had not even ended when fascists began crowing on their websites and some media outlets.  Novaya Gazeta has published some of the comments published to demonstrate the level to which Russian society has become infected by neo-fascist ideas. The Administrator of the server which Nastya had a Live Journal blog on had to remove commentaries.

Anastasia Baburova was fatally wounded on 19 January as she returned from a press conference together with Stanislav Markelov. Markelov was killed on the spot, Nastya died that evening in a Moscow hospital.

In an address to journalists shortly before his death, Markelov focused on the unlawful manner in which murderer of 18-year-old Elsa Kungaeva, Yury Budanov had been released from imprisonment.  He spoke of plans to appeal against the release and against the unprofessional behaviour of the judge in releasing Budanov despite the Kungaev family’s protest.

Stanislav Markelov also represented journalist and civic activist Mikhail Beketov who remains gravely ill after a brutal attack on him in November 2008. Beketov is well-known as an opposition journalist who published hard-hitting articles in the Moscow region newspaper “Khimkinskaya Pravda” about the local authorities and was actively fighting for the preservation of the Khimky Forest which until recently was scheduled to be felled to make way for an arterial road from Moscow to St. Petersburg.

However on Monday Beketov’s defender S. Gurevych issued a statement in which she said that Markelov’s murder could not be linked with her client’s case. “Markelov had almost nothing to do with this case. He never came to Khimki, and the only role he played was in defending Beketov when the latter was accused of libel.”

From information at both the Russian and Ukrainian Services of Radio Svoboda and www.grani.ru