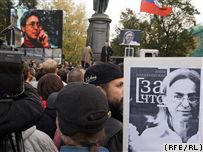 Friends and admirers of Anna Politkovskaya today marked the third anniversary of her murder amid growing doubts that her killers will ever be brought to justice.
Politkovskaya, who tirelessly criticized the Kremlin and exposed human rights abuses in Chechnya, was gunned down in her Moscow apartment building on October 7, 2006 as she returned home from the supermarket. She was 48.

No one has been convicted in the case, and investigators have so far failed to identify those who ordered the contract-style killing.
Prominent rights campaigners, artists, and opposition politicians took turns at a rally in central Moscow on October 7 to remember the crusading journalist.
"I think the best way to honor her memory would be for those who commissioned her murder -- not those who killed her -- to eventually be found and convicted," politician Boris Nemtsov told the mourners. "I think that the best way to honor her memory would be for censorship to finally be abolished in our country, for Russia to become a free country."
At a news conference in Moscow one day earlier, Politkovskaya’s adult children, Vera and Ilya, said they were losing hope that their mother’s killers would ever be brought to justice.
"Our family is starting to lose hope that the whole chain of those involved in this crime will be found and brought to court, because as time goes by, the chances of finding the people involved in this murder are fading," her daughter Vera said.
Three men suspected of being accomplices in the killing were acquitted by a Moscow jury in February. The Supreme Court overturned the verdict in June and sent the case back to trial.


But the start of the retrial was postponed at the request of Politkovskaya’s children, who have demanded that the case first be sent back to investigators.
Ilya Politkovsky said the new investigation was the "last chance" to gain justice for his slain mother, "because a long time has gone by. We very much hope that they will use this chance."
New Suspects In Case
Sergei Sokolov, the editor in chief of Politkovskaya’s newspaper, "Novaya gazeta," said the suspected killer evaded capture in April and was now on the run in Europe.
Speaking at the same news conference, he expressed doubt the mastermind would ever be identified. But he said investigators had come up with new suspects in the case.
"I think that if everything goes well, there will be a more characters in the dock than there had been previously," Sokolov said.
Sokolov, who has worked closely with investigators, could not give any details on the new suspects because the investigation is still ongoing.
Two representatives of the Paris-based media watchdog Reporters Without Borders, who were planning to attend the news conference, were denied Russian visas.
The group’s head, Jean-Francois Julliard, accused the Russian authorities of deliberately barring the pair from entering the country.
Kadyrov Wins Defamation Case
In a related development, Chechen President Ramzan Kadyrov on October 6 won a defamation lawsuit against prominent rights campaigner Oleg Orlov.
Orlov had repeatedly blamed Kadyrov for the killing of rights activist Natalya Estemirova, who had drawn Kadyrov’s anger by reporting on rights abuses in Chechnya.
Estemirova, a friend of Politkovskaya, was abducted from her home in the Chechen capital of Grozny and killed in July.
The court ordered Orlov’s group, Memorial, to publish a retraction of Orlov’s statement on its website within the next 10 days and pay the equivalent of $1,680 in moral damages
Orlov himself will have to pay Kadyrov $670.
Orlov, who has vowed to appeal the ruling, nonetheless sought to put a positive spin on the ruling.
"I don’t agree with the court’s decision, of course, but now I understand that in today’s Russia, no other ruling should have been expected," Orlov said. "I think that during these two days of trial, we offered thorough and very serious arguments showing that we are right. The fact that we were able to do this is a victory for us."