The Internet publication Glavnoye has published a letter from Thomas Hammerberg, Council of Europe Human Rights Commissioner, expressing concern over the “dispersal of protests” over the destruction of a part of Kharkiv’s Gorky Park.

Some readers may have endorsed our appeal to Mr Hammerberg which can be read here: http://khpg.org.ua/en/index.php?id=1275908780  This was sent to Mr Hammerberg in July, together with a number of documents.

We pass on Mr Hammerberg’s letter in full:

I have received a number of reports concerning incidents which allegedly took place in the context of the dispersal of protests against the decision to destroy a part of the century-old Gorky Park woods in Kharkiv starting in May this year. According to those reports, certain rights protected by the European Convention on Human Rights were violated, including freedom of assembly (Article 11), freedom of expression (Article 10) and the right to liberty and security (Article 5). It has also been alleged that the force used to disperse the protests resulted in injuries to certain persons, who – in some cases – were reportedly denied medical assistance. In addition, it has been claimed, that some activists were arbitrarily detained. The situation has met with widespread public criticism, including by the Ombudsperson of Ukraine.

I would like to recall that, apart from its obligations to protect the rights enshrined in the European Convention on Human Rights, Ukraine has ratified and is bound by the United Nations Convention on access to information, public participation in decision-making and access to justice in environmental matters (the Aarhus Convention). In a genuinely democratic and pluralist society, the community is consulted and informed about decisions of public authorities and has the right to express freely its ideas concerning such decisions and to protest peacefully against them.

I would therefore urge you to ensure that any activities undertaken by the local authorities – as well as any affiliated entities or persons – are fully in compliance with human rights principles and the international commitments of Ukraine. The local authorities should engage in proper consultations and dialogue with the community and ensure that their actions are legal. The allegation of the use of violence by the “Municipal Guard” and loggers during the dispersal of the protest in Gorky Park, as well as the conduct of the police, should be the subject of an independent, impartial and transparent inquiry. Such an inquiry should aim at drawing general conclusions and giving recommendations how to proceed should any similar situation arise in future and in the interest of strengthening the protection of human rights and freedoms in general. Of course, there is the need to distinguish such an inquiry from any criminal investigations which have been completed, are underway or have yet to be initiated into possible misconduct by public officials or affiliated entities or persons.

I would welcome any comments you may wish to make concerning the situation related to Gorky Park. I intend to review this issue in the context of my ongoing dialogue on human rights issues with the authorities of Ukraine. 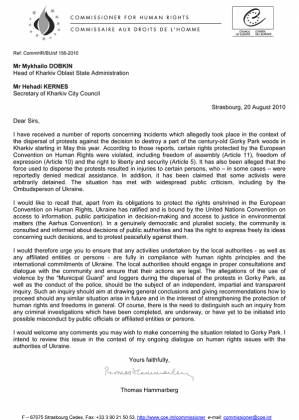