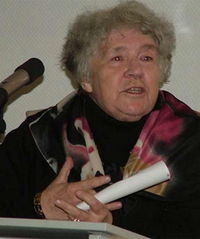 The death has been announced of Mykhailyna Kotsyubynska, literary critic, translator and one of the Shistdesyatnyky [the sixties activists).

Mykhailyna Kotsyubynska, born on 18 December 1931, was niece of the great Ukrainian writer Mykhailo Kotsyubynsky.  It was the XX Congress and Khrushchev’ denunciation of Stalin that opened her eyes to the reality of the Soviet myth.  She drew close to Yevhen Sverstyuk, Ivan Svitlychny and other Shistdesyatnyky active in the Klub tvorchoyi molodi [Club for Creative Young People].

Her first public act of opposition was in adding her voice to the protest against the arrests of members of the Ukrainian intelligentsia in 1965 expressed during the preview showing of S. Paradzhanov’s film ‘Tini zabutykh predkiv’ [‘Shadows of forgotten ancestors’] in September 1965.

She was thrown out of the Party as a result and moved to another department of the Institute, and even her articles about the works of Taras Shevchenko could not be published. Finally, in 1968, she was dismissed from her position at the Institute.

Mykhailyna Kotsyubynska did not consider herself a dissident seeing the latter as thinking in a political manner. In her case, she had resisted the regime prompted by ethical criteria and her art.  She did however tack part in protests and was always willing to sign letters of protest and petitions, and keep in touch with friends who had been imprisoned, all of this being fraught with danger in Soviet times.

In later years she became laureate of the Vasyl Stus Prize, the National Taras Shevchenko Literary Award and others.  She headed the literary group which in 1999 published a many volume collection of the works of the great poet Vasyl Stus (who died in labour camp in 1985).