In Place of a Wreath at the Grave of Mykhailyna Kotsyubynska

In that terrible 1984 which took from us figures so important for the Ukrainian dissident movement – Boris Antonenko-Davydovych, Valery Marchenko, Oleksa Tykhy, the words came to me in exile: “With each year the earth becomes more dear and native from its graves…”  After 7 January 2010 when Mykhailyna Khomivna Kotsyubynska passed into Eternity, the earth has become even dearer.. 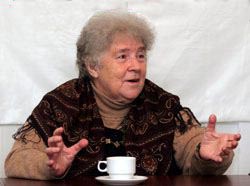 An earthly life has passed  which “served as argument for its own philosophy” (Mykhailyna Kotsyubynska would often quote these words by Albert Schweizer). One can study from it, as from a textbook, what is freedom and strength of spirit, commitment to truth and love for Ukraine. And one special feature which she herself mentioned, speaking to graduates of the Ukrainian Catholic University in 2004: “Inner freedom helps to develop the ability to stand and walk upright”.  She stood so unwaveringly and confidently that it was easy for many to find support and turn to her.

An earthly life has passed which brought rich fruit. She was a dazzling literary specialist and essayist. Mykhailyna Kotsyubynska wrote an incredible number of articles of research.  Incredible to imagine achieving so much in a life filled with stifling persecution, the despair of loss and years of enforced silence. Over recent years she wrote in spite of her illness and constant pain. She created her own style – accurate, scrupulously refined and developed, and quite unmistakeable.  Sufficient to glance at her studies of Shevchenko’s poetic works, and the two volume work “My Horizons” which she said contained all that in her view was worthy of attention from her academic work spanning almost half a century.

An earthly life has passed which for long was and will for ever enrich the Ukrainian spirit. Publishers and editors of journals, academic institutes where she gave lectures and the Kyiv Mohyla Academy which awarded her an honorary doctorate were proud to be associated with her. Her name adorns the list of laureates of the Vasyl Stus Prize, the National Taras Shevchenko Literary Award, the Olena Teliha Award, the Oleksandr Biletsky Literary Award.

The Ukrainian Branch of the International PEN Club bids farewell to its co-founder.  The community of the Ukrainian Catholic University remembers with gratitude the treasures which communicating with their Friend brought and prays for her eternal rest.  And the heart continues to ache for the many whom Mykhailyna Kotsyubynska warmed and defended, with whom she “passed fearlessly through crossed swords”.