January 20, 2011:  The European Parliament has overwhelmingly endorsed a joint resolution condemning the violent crackdown in Belarus following last month’s presidential election. In the resolution adopted in Strasbourg, lawmakers also called for a renewed EU travel ban on senior Belarusian officials, along with economic sanctions such as a freezing of aid provided via International Monetary Fund (IMF) loans.

SPECIAL PAGE on the Belarus Crackdown

It says these sanctions should remain in force "minimum until all political prisoners and detainees are released."  The vote came almost simultaneously with an announcement that EU ambassadors would boycott the January 21 inauguration ceremony in Minsk for longtime President Alyaksandr Lukashenka.

Lukashenka’s official victory sparked mass protests in Minsk that were forcibly dispersed by police, who detained hundreds of demonstrators and several presidential candidates.

"The European Parliament always stands on the side of the Belarusian people," parliament president Jerzy Buzek said after the vote. "As we punish the regime for the rigging of elections and the violent crackdown that followed, we double our efforts to support civil society."  The text was a compromise among five political groups, including the two largest, the center-right European People’s Party (EPP) and the center-left Socialists & Democrats (S&D).

Polish MEP Jacek Protasiewicz added support for the individuals who still remain in prison, including several presidential candidates. "Since the resolution is not only the political statement of the parliament but also moral support for those who are jailed, we’d like to propose to include in our resolution the names of four former presidential candidates who are still in the custody of the KGB," Protasiewicz said. "They are Uladzimer Nyaklyaeu, Andrey Sannikau, Mikalay Statkevich, and Ales Mikhalevich, as well as two leaders of the democratic opposition parties, Pavel Sevyarynets, cochairman of the Belarusian Christian Democracy,and Anatol Labedzka, the leader of the United Civic Party."

Other demands in the resolution include the reopening of the Organization for Security and Cooperation in Europe’s (OSCE) office in Minsk that was shut down by Belarusian authorities after December 19 vote.

Despite indications from both the European Commission and EU foreign ministers that Belarus’s participation in the bloc’s Eastern Partnership will continue, the resolution challenges them to consider a suspension.

In an amendment approved during the voting, the European Parliament calls for a decision "no later than at the Eastern Partnership summit in Budapest [in May] if it there is not an acceptable explanation and considerable improvement of the situation in Belarus."

The only party not endorsing the joint resolution was the Confederal Group of the European United Left (GUE), arguing that an independent investigation into the events had to be carried out before any talks of sanction should be imposed.

Olga Stuzhinskaya, the director of the Brussels-based nongovernmental group Office for a Democratic Belarus, described the resolution as "harsh" but "fair."  "I think it is a well-written text that takes into account the recommendations and suggestions made by representatives of Belarusian civil society and pro-democratic political parties," Stuzhinskaya said. "It is very good to see that the position of the European Parliament is in line with statements made by the OSCE mission and other international organizations."

The January 20 vote came after six prominent U.S. senators called for a strong, joint response on Belarus by the United States and the European Union. In the letter, the senators -- including Joseph Lieberman (Independent Democrat, Connecticut), John McCain (Republican, Arizona), and Richard Lugar (Republican, Indiana) -- say the measures should carry "very real and significant consequences" for Lukashenka and other Belarusian officials allegedly responsible for human rights abuses, vote fraud, and the continued detention of opposition presidential candidates and party leaders following the December 19 vote.  They say the measures should renew targeted sanctions against Lukashenka and other officials, and include a ban on doing business with Belneftekhim, Belarus’ state oil company.

Even if the European Parliament enjoys few foreign policy instruments, the institution can play a role in engaging civil society in Belarus. The resolution contains both a line for more scholarships to the European Humanities University (EHU) based in Vilnius to host Belarusian students and financial support for independent media and NGOs promoting democracy.

The resolution is also likely to trigger a flurry of responses on Belarus from other EU players. "Solidarity with Belarus" donors’ conferences are planned for Warsaw and Vilnius in early February and the EU foreign ministers are expected to decide on visa sanctions on January 31.

More than 30 Belarusian officials are on the current visa sanctions list, which the EU imposed following the disputed 2006 elections but suspended two years later.
EU foreign ministers are expected on January 31 to add the names of officials directly responsible for the recent crackdown.

Lukashenka has promised retaliation if sanctions are imposed. "If someone tries to impose economic or any other kind of sanctions we must react swiftly and prepare retaliatory measures, right up to the very toughest," the Belarusian president’s press service quoted him as saying on January

Relatives of demonstrators detained during a mass rally protesting the reelection of President Alyaksandr Lukashenka check a list of prisoners outside a prison in Minsk on December 21. 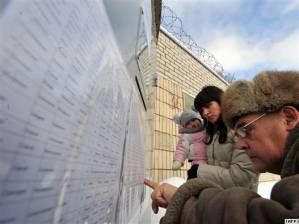