Yanukovych declared Enemy of the Press No. 1

On 3 May 2011, to mark World Press Freedom Day, the Institute for Mass Information and the Kyiv Independent Media Trade Union announced their list of Enemies of the Press in 2010.

The list contains 23 names, with President Viktor Yanukovych in first place.  He is followed by the Prime Minister, Mykola Azarov.  The “bronze” was received by the Head of the Central Department of Housing of the Kyiv City State Administration, Volodymyr Storozhenko.

Yury Lukanov, Head of the Kyiv Independent Media Trade Union, explained at a press conference in Kyiv that during 2010 the President’s guards had on a number of occasions obstructing journalists from carrying out their duties, while features critical of the President had been taken off air. Overall, 12 cases of violations of journalists’ rights by the President’s Administration had been recorded during the year.

Lukanov explained that the second place in this ignominious list went to Prime Minister Mykola Azarov because of his guards who had used force against journalists and his press service which demanded that journalists’ material be totally agreed with the Prime Minister’s Press Secretary.

Storozhenko had excelled himself in 2010 by using foul abuse of television journalists and throwing a journalist’s microphone into the rubbish bin.

Photo from Telekritika: 3 May 2011 Press Conference: Oleksandr Akymenko (IMI) on the left and Yury Lukanov, KIMTU on the right 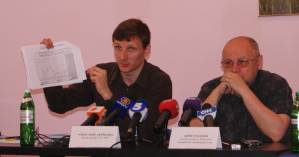