The Belarusian Prosecutor has refused to release from custody correspondent of the Polish newspaper Wyborcza and activist of the Union of Poles in Belarus, Andrzej Poczobut.  This is despite the fact that 40 people expressed willingness to stand as guarantors that he would not abscond.

Andrzej Poczobut has been held in custody in Belarus accused of “slandering” President Lukashenko since 6 April.

The Prosecutor is now preparing charges against him, examining material from the two work computers that have been confiscated, looking for “evidence” to back the accusations. They are looking at which sites he visited, who he corresponded with.  This information needs to be ready by the end of next week.

The Prosecutor is seeking to bring the Wyborcza correspondent to court for a supposed breach of one of the articles, probably Article 367 § 1  of the Criminal Code which carries up to two years imprisonment for contempt shown to the President of Belarus. Poczutek is alleged to have defamed Lukashenko through two commentaries on the Internet and in eight articles published by Wyborcza. Including those where the President is not even mentioned.

PLEASE sign the appeal for Andrzej Poczubut’s release at 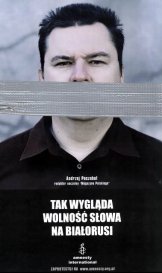