On 5 May 2011 five young people were sentenced to 3 and 4 year periods of imprisonment.  Their “crime” was to have taken part in the demonstration in Minsk on 19 December 2010 against presidential elections which the international community has condemned for serious irregularities (and that is diplomatic speak).

The judge, Alla Bulash apparently “softened” her verdict by announcing that they had 10 days to lodge an appeal.

Pavel Vinohradov’s father says that they will all definitely appeal the sentences.  He spoke of how hard it was to hear such a sentence but said that he was proud of his son.

The Polish newspaper Wyborcza reports that Pavel’s sentence was increased because the police, when searching through his computer, found a photo where you could see a portrait of Lukashenko on fire. He was therefore also charged with disrespect for a national symbol.

Polish analyst Paweł Usow calls the trials a demonstration of force by the authorities with the sentences fixed in advance. The country is in serious economic crisis, he explains, and the regime is worried that the general disgruntlement will fuel support for the opposition.  They therefore want to crush the opposition and show that they’re in charge. 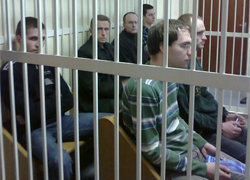