An opposition activist and journalist in Belarus, Irina Khalip, has been given a suspended prison sentence. She was convicted of rioting after last December’s presidential election which she says was rigged.

Ms Khalip is the wife of opposition leader Andrei Sannikov, sentenced on Saturday to five years in prison for organising the election protests.

She walked free from court almost five months after being detained along with hundreds of other activists.

The trial in the capital Minsk comes after the election in which President Alexander Lukashenko was re-elected with nearly 80% of the vote.

Western monitors described the poll as "flawed". Mr Sannikov won the most votes among the nine opposition candidates, taking 2.43%.

Police violently dispersed a rally that drew tens of thousands of protesters complaining about electoral fraud on election night on 19 December.

Around 700 people were arrested, including seven presidential candidates.

Since then, more than 20 opposition activists have been sent to prison.

Mr Sannikov, a former deputy foreign minister, said during his trial that he was tortured by the secret police, and that its chief threatened harsh reprisals against his wife and their four-year-old son.

Earlier this year, the authorities threatened to put their son in an orphanage.

Ms Khalip, 43, will be on probation. She will have to face the court again in two years’ time.

After the hearing she told reporters her trial was political.

"I still feel like a political hostage, " she said.

Belarus has come under increasing political and economic pressure recently, with the US and EU slapping harsh sanctions on the government.

President Lukashenko and other top officials have been forbidden from travelling to the West.

The country’s central bank has been running out of hard currency, with many analysts predicting a steep devaluation of the Belarussian rouble. 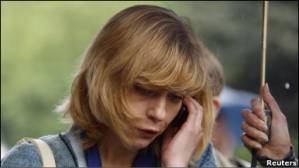