Mustafa Dzhemiliev: Our Principle of Non-Violence enabled us to avoid bloody conflict in the CrimeaMustafa Dzhemiliev: Pogroms against the Crimean Tatars likely in the near futureCrimean authorities present the Crimean Tatars with an ultimatumCrimean law enforcement officers target a Mejlis activistWill the Crimean authorities override the President’s word?Spiritual Directorate of the Muslims of the Crimea condemns Supreme Court ruling on Soborna MosqueLet’s build our places of worship together!Muslims win their court case for the Soborna MosqueAfghanistan War veterans in the Crimea come out in support of the Soborna MosqueLawlessness unto themselvesPolice Chief slams attempts at provocation by the Simferopol City CouncilCourt upholds Crimean Muslims over land for the Soborna MosqueCrimean Tatars warn Council of Europe of possible conflict in the CrimeaCrimean Prosecutor protests against the actions of the Simferopol City Council.For a tolerant CrimeaCrimean Muslims begin protest over obstruction in building a Mosque in SimpferopolCrimean Tatars call for international forum on plight of deported people of the CrimeaCrimean journalist prosecuted and declared a ‘foreign agent’ for opposing Russia’s war against UkraineRussians abduct, torture and imprison young Crimean Tatar from Kherson oblast, then come for his father It's back to the USSR as Russia tries to destroy Ukrainian identity on occupied territory
• Topics / Deported peoples

On Wednesday around 25 thousand Crimean Tatars gathered on the central square in Simferopol to honour the memory of the victims of the Deportation in 1944.

People held banners demanding the return of their property lost following the Deportation and the reinstatement of Crimean Tatar national autonomy.

A resolution was passed at the rally calling on the President, the Verkhovna Rada, the UN, OSCE, EU and Council of Europe to establish their position in the nearest future on the date and place for an international forum on reinstatement of the rights of the Crimean Tatar People.

The traditional “Light a candle in your heart” took place on the eve of the anniversary.  The participants laid candles to form 67 – the number of years since the Deportation.

The Head of the Mejlis, Mustafa Dzhemiliev stated at the rally that Russia was financing the activities of Crimean Tatar organizations which take a stand against the Mejlis. He also asserted that the Security Service [SBY] was not defending the interests of the Crimean Tatar People in this case.

“Yet another event with negative impact for our people was the dissolution of the SBU investigation group investigating the crimes of the Soviet regime against the Crimean Tatars which the country that borders ours demanded”.

Mustafa Dzhemiliev also asserts that there has been a reduction in the number of Crimean Tatars in the system of government, an increase in pressure on Crimean Tatar business and a sharp decline in public funding for programmes aimed at resolving the social problems of repatriants. He says that on 23 million UAH has been allocated which is 6 times less than what it should have been according to the programme developed.

The Head of the Crimean Parliament, Vasyl Dzharty spoke at the rally condemning Stalin’s repressions and promising that the authorities would help to resolve the problems of the repatriants.

From the report on the BBC Ukrainian Service 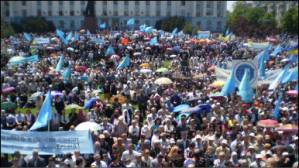