Transport companies “strongly advised” not to carry protesters to KyivReports again rife that police stopped demonstrators reaching their destinationsMore reports of traffic police used to stop protestersTraffic Police again used against demonstratorsCriminal investigation initiated against peaceful Tax Code protestersDemonstration against Tax Code continues despite banCourt bans peaceful demonstration while Ukraine speaks of democratic commitment in BrusselsScuffles between police and protesters on Independence SquareTraffic police accused of preventing 140 coaches with protesters from coming to KyivAuthorities prevent protesters against the Tax Code from reaching KyivMIA denies any obstruction by traffic policeTraffic police and SBU again obstructing protesters?How the Traffic Police do not ensure safe travellingCall for investigation into police obstruction of supporters of the Kyiv PatriarchateKyiv Protesters put Demands to the GovernmentA brief description of the KHPG strategic litigations in the first half of 2021A brief description of the KHPG strategic litigations in July–December 2020The practice of application of Article 111 of the Criminal Code of UkrainePost-Maidan Tale of ImpunityUkrainian justice based on false police reports: From Maidan to former Kremlin political prisoner
• Topics / Freedom of peaceful assembly
• Topics / Freedom of movement
• Topics / Social and economic rights

The BBC Ukrainian Service reports that over 200 organizations and trade unions supported Thursday’s protest action “Vpered!” [“Forward] outside parliament. Small and medium business owners say that the actions of the authorities are depriving them of their work and that they have no option but to protest.

The protesters were forced to outwit the authorities when organizing their protest this time..

Earlier one of the coordinators, Andriy Panayotov who was also involved in the Tax Code Maidan and Car Rally against the Tax Code reported that the local authorities had tried to obstruct people wanting to join the protest. He said that transport firms had been put under pressure to “dissuade” them from bringing protesters to Kyiv.

As reported, such accusations had been made in connection with previous protests. The authorities and traffic police deny the charges.

According to the Co-Chair of the Council of Business Owners attached to parliament, Yevhen Shapovalenko, this time people wishing to come to the protest did not organized transport, but came in their own or on scheduled coaches and trains, so as to avoid run-ins with the traffic police.

“I telephoned transport firms in the Lviv region which had previously provided their services. They told me that they had been warned by the traffic police that if they provided coaches, they would lose their licences. They said that they’d find a reason” Yevhen Shapovalenko said.

Information agencies report that around 1000 business people set out to Kyiv from Lviv and Khmelnytski. The protest was expected to draw several thousand disgruntled small business owners.

They are demanding a package of “people’s reforms”, increase in salaries, the dismissal of the government and the “authors of the anti-people reforms”; a stop to political and economic repression and effective measures to fight corruption.

The large-scale protests began after the government revealed a draft Tax Code in autumn. Representatives of small and middle-size business said that the new tax rules would make it impossible for them to work.

According to the Ukrainian weekly Focus, in Spring 400 thousand businesses are on the verge of closure.

During the large-scale protests which began towards the end of November last year, the protesters demanded that the President veto the draft Tax Code which parliament had passed.

After several weeks of protest the President said that he was vetoing the Tax Code. The document was reworked and soon passed again. However many of the business owners say that the amendments made were superficial.

Those who took part in last year’s protest allege persecution by the authorities. Several, including people not physically present, were charged with damaging the granite slabs on Maidan Nezalezhnosti in Kyiv during the protests. Those accused of damaging the granite have now finally been released from custody, however Serhiy Kostyakov has been held in custody in the Lukyanivsk SIZO No. 13 since 1 December 2010.  He is accused under Article 296 of hooliganism. It is claimed that on 22 November he damaged a car driving along a street which the protesters had blocked. A particularly worrying fact is that there is no proof aside from the assertion of the car’s driver.

As well as a Car Rally from different regions of Ukraine held in March, there was also a Day of Rage on 14 Saturday. Several protesters were detained (according to reports, five). They were all held in a police van and only began being released after protocols of administrative offences were drawn up.

There were up to a thousand protesters in the action organized by the Civic Movement of Ukraine, Spilna Sprava [Common Matter], Opir [Resistance] and the political party Front for Change. The protesters who demanded the resignation of the President, parliament and Cabinet of Ministers , as well as the revoking of the new Tax Code, also included deputies from BYuT and Our Ukraine – People’s Self-Defence. In the districts adjoining the park some people alleged that the police had prevented them from joining the protest. More than 10 police vans were stationed around the park, and according to spokesman from the Kyiv police, V. Polishchuk, 1400 police officers were deployed.

The Organizer of that event, Oleksandr Danylyuk, was detained by police and was on Thursday fined by a Kyiv court, for supposed “infringements of the rules for peaceful gatherings.”

Information about the 19 May protest from 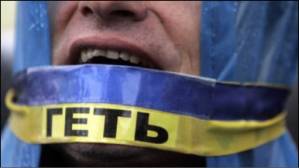