Small business owners once again protest in KyivTransport companies “strongly advised” not to carry protesters to KyivReports again rife that police stopped demonstrators reaching their destinationsMore reports of traffic police used to stop protestersTraffic Police again used against demonstratorsCriminal investigation initiated against peaceful Tax Code protestersDemonstration against Tax Code continues despite banCourt bans peaceful demonstration while Ukraine speaks of democratic commitment in BrusselsScuffles between police and protesters on Independence SquareTraffic police accused of preventing 140 coaches with protesters from coming to KyivAuthorities prevent protesters against the Tax Code from reaching KyivMIA denies any obstruction by traffic policeTraffic police and SBU again obstructing protesters?How the Traffic Police do not ensure safe travellingCall for investigation into police obstruction of supporters of the Kyiv PatriarchateA brief description of the KHPG strategic litigations in the first half of 2021A brief description of the KHPG strategic litigations in July–December 2020The practice of application of Article 111 of the Criminal Code of UkrainePost-Maidan Tale of ImpunityUkrainian justice based on false police reports: From Maidan to former Kremlin political prisoner
• Topics / Politics and human rights
• Topics / Social and economic rights

Participants in the Spring Protest March held outside parliament on Thursday passed a resolution with demands of an economic nature.  The resolution was passed by a general vote among those presents. The protesters are calling on the government to:

adopt “People’s reforms” (a package of draft laws aimed at retaining the simplified system of taxation; imposition of a moratorium on monitoring checks of small businesses; establishment of a standard social security contribution which is manageable for small businesses; removal of this contribution for pensioners and people with disabilities);

pass a Declaration of Economic Freedom.

reassess the size of the subsistence minimum;

impose a moratorium on the price of communal charges;

put the money received from privatizing Ukrtelecom into the Pension Fund in order to increase the minimum level of pension provisions and prevent an increase in retirement age.

put an end to persecution of activists from the Tax Code Maidan (the protests against the new Tax Code late last year.  At least eight people are facing disturbingly far-fetched criminal charges – translator)

The protesters also called for a stop to land reforms which they contend will lead to all the land ending up in the hands of large capital.

They demanded that a real battle against corruption be undertaken at all echelons of power. Personal liability of officials should be imposed for abuses.

Reports regarding numbers varied widely.  Radio Svoboda’s Yevhen Solonina said that there were around 5, 000 protesters.  Two western press sources – the Financial Times and Associated Press put the figure much lower (1000-1500). 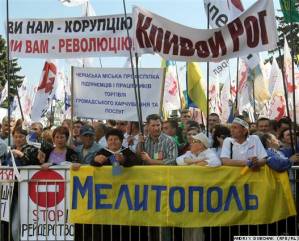