A court in Belarus has sentenced two opposition leaders to prison terms on charges of organizing a mass protest against the disputed reelection of President Alyaksandr Lukashenka.

Mikalay Statkevich and Dzmitry Vus, both of whom ran against Lukashenka in the December 19 poll, were sentenced to six and 5 1/2 years in prison, respectively.

Alyaksandr Klaskouski, an opposition figure who stood trial with the two ex-candidates, was found guilty of involvement in the rally and given a five-year prison term.

Four other opposition activists were sentenced to between three and four years in jail for participating in the protest.

All had pleaded not guilty.

Prosecutors accused Statkevich and Vus of leading an armed mob that sought to damage property and seize the government building in Minsk.

They had demanded an eight-year term for Statkevich, seven years for Vus, 8 1/2 years for Klaskouski, and four years for the remaining defendants.

The sentences against Statkevich and Vus are the lengthiest so far in the string of trials against participants of the postelection protest in central Minsk, during which some 600 people were detained.

The longest term prior to the May 26 sentences had been given to Andrey Sannikau, Lukashenka’s main opposition challenger in the election, who was given five years in jail earlier this month on similar charges.

Uladzimer Nyaklyaeu and Vital Rymasheuski -- who also challenged Lukashenka in the December vote -- were handed two-year suspended sentences last week for their role in the protests.

Lukashenka, famously branded "Europe’s last dictator" by Washington, has run Belarus with an iron fist for nearly 17 years, cracking down on opposition and independent media.

The trials have drawn strong criticism from the West, whose monitors deemed the presidential election "flawed."

Western governments have responded by imposing sanctions and a travel ban on Lukashenka and more than 100 of his associates. 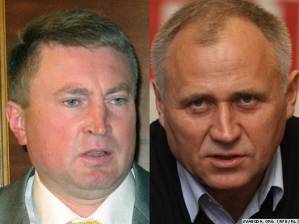