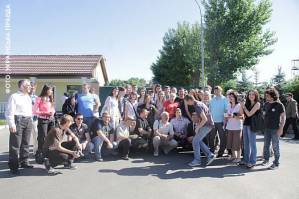 The journalists who were stopped by a court ban from holding a protest in support of freedom of speech and aimed at reminding the President of the promise given a year ago and not kept to reveal his reportedly sumptuous residence, Mezhyhirya, arrived this morning at the village of Novi Petrivtsi.  They were met by people clearly monitoring whether they were going to heed the court ban.  They responded saying that they had also come to monitor how the said ban was enforced.  According to members of Stop Censorship, the President’s cortege drove past ignoring the journalists.

Mustafa Nayem, one of the journalists, has never been given a chance to follow through Yanukovych’s apparent invitation to visit Mezhyhirya. He and the other journalists stressed that the promise to show journalists his residence was given a full year ago.

Mustafa Nayem told the BBC Ukrainian Service that Viktor Yanukovych is most probably “afraid of accusations since there are a fair number of investigations which show that the land was appropriated in a dubious way”.

Victoria Syumar, Director of the Institute for Mass Information told the BBC that the President had effectively for a year now not communicated openly with journalists. She believes that he is avoiding keeping his promise to show his residence because “he’ll then have to answer where it’s all from”.

The President’s official website carried greetings to journalists today to mark Journalist Day. Amongst other words, it was stated that “journalism in Ukraine has become a sensitive barometer for the development of democratic processes”.

On 3 May, World Press Freedom Day, Viktor Yanukovych was declared Enemy of the Press No. 1 with Prime Minister Azarov in second place (more details at: khpg.org/index.php?id=1304427330 )