Survey: Almost 50% see political repression by the regimeMore high-level warnings against persecution of the oppositionTymoshenko prevented from visiting voters within UkraineUkrainian TV Patch Up Job on PACE RecommendationsFreedom House Concerned by Detention of Yulia TymoshenkoEU sees political motives “in the cases of Yulia Tymoshenko and other members of the former government”Situation with Tymoshenko’s prosecution to be discussed during PACE talksEuropean Parliament President speaks of political nature of Tymoshenko’s caseContradictory statements from Prosecutor about court order for Tymoshenko’s detentionYulia Tymoshenko detainedBetrayal through SilenceCourt extends Yury Lutsenko’s imprisonmentLutsenko alleges attempts to blackmail him using family visitsFree Yury Lutsenko!Ukrainian intellectuals call on Strasbourg to defend Yury LutsenkoView from abroad on discrepancy between the charges against Lutsenko and the punishmentYury Lutsenko says he will continue his hunger strikeConcerns mounting for Yury Lutsenko, on hunger strike over politically motivated imprisonmentYury Lutsenko: I am defending myself with what little I have leftRivne journalists declare hunger strike in Strasbourg in support of Yury Lutsenko
• Topics / Politics and human rights
• Topics / The right to a fair trial

On the Criminal Prosecution of Yury Lutsenko 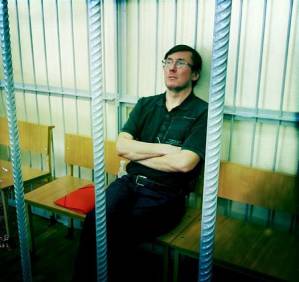 It is almost half a year since the day that former Minister of Internal Affairs Yury Lutsenko was taken into custody. His remand since that time in a SIZO [pre-trial detention centre] given the absence of any legal grounds is in breach of Ukraine’s legislation. The first court hearing in his case is scheduled for 9 June 201 and we therefore consider it our civic duty to express our position with regard to the former Minister’s work and the reasons for his prosecution.

The so-called Lutsenko case is just one example of how today’s leaders of Ukraine are not only resorting to criminal prosecution of their opponents and critics, but are also doing this with numerous violations of human rights and domestic legislation.

The many violations are reported by the media. foreign and Ukrainian experts, in the report by the Danish Helsinki Committee on Human Rights, etc. There have been by no means isolated cases of politically motivated criminalization of actions which do not even warrant administrative penalties. These include, for example, the criminal cases linked with the Tax Code Maidan [the protests by small business owners against the new draft Tax Code); the arrests and use of torture against members of the nationalist organization “Tryzub” for damaging a bust to Stalin; persecution for supposed divulgence of State secrets, and others.

The systematic violations of civil rights, the assault on democratic rights and freedoms in Ukraine and political persecutions have prompted numerous appeals, protest rallies, public statements and other measures by members of human rights organizations, civic activists and politicians, stressing that such actions by those in power are unacceptable. We must however note the lack of any reaction or positive moves.
Together with political persecution, there is also systematic deception of the Ukrainian public and international community through information about supposedly serious achievements by the current regime, including with respect to human rights protection. None of this is substantiated by objective facts or figures. At the same time information is spread asserting total lack of activity by the former government.

The Ministry of Internal Affairs under President Kuchma was much criticized for lack of openness and accountability to the public and for politically serving the regime. This included voting for the “right” candidate and helping to falsify election results; being suspicious of civic and international organizations .with appeals and letters arousing genuine outrage from the MIA management as obstructing them in fighting crime.
The appointment in 2005 of a new Minister began a process of depoliticizing of the police force, dialogue and establishment of contact with civil and international organizations. We would note that between 2005 and 2009 there was no political pressure from the police. At the same time, Yury Lutsenko’s efforts to introduce cooperation with civil society and public accountability elicited resistance not only from his opponents, but also from many of those who in 2005-2006 and 2007-2009 were in his team.

Nonetheless, step by step the seeds of a system of human rights monitoring of the work of Internal Affairs bodies emerged and developed. What in 2008-2009 already seemed natural for civil organizations – invitations and the participation of MIA leadership in NGO events, coverage of the MIA’s position, provision of information requested by civic organizations, etc, had been developed step by step from 2005 and was a serious breakthrough in the system of interaction between the police and the public.

At that time there was also a lot of hope among the public for positive change, for a restructuring of the police force based on the principles of democracy and openness. The Minister also showed willingness to take part in creating new structures and models of management.
One first model was seen in the mobile groups on monitoring human rights observance in the work of police stations which included representatives of civic organization. These mobile groups gained access to traditionally secretive special police institutions – temporary holding facilities, special receiving centres for people detained or imprisoned on administrative charges, receiving centre for children, duty units.
An indicator of the positive changes supported by Lutsenko was the fact that the experience of organizing the work of those mobile groups was followed by other countries. It also found support with the UN Human Rights Council and the UN Committee against Torture; the Council of Europe Human Rights Commissioner; experts from the Council of Europe and the European community. Specialists saw it as the prototype of a national mechanism for preventing torture which Ukraine needed and still needs to implement in fulfilment of its obligations under the Optional Protocol to the UN Convention against Torture which it has ratified.

In 2010 with the change in leadership of the MIA, the work of the mobile groups was stopped and in most regions they ceased to exist. In spite of statements made by the new Minister, Anatoly Mohylyov, mobile groups with members of the public have not been able to visit a single district police station where there has been an accident or death of a detainee.

Another demonstration of the wish to reform the MIA on principles of transparency and cooperation with the public was seen in the signing by Yury Lutsenko on 28 December 2005 of Order No. 1243. This created a Public Council, co-chaired by Yury Lutsenko, attached to the MIA on Human Rights in the Work of the Police. The Council was made up of representatives of the most prominent and influential NGOs which can provide professional criticism of police bodies, assisting them to move towards positive change.

We name such some of the results of the Council’s work: monitoring and improvement of the normative base of police bodies; participation in the work of staffing and attestation commissions attached to the Central or regional departments of police; receiving members of the public together with police management; drawing up a Plan for Countering Xenophobia up till 2009; drafting a Programme for Ensuring Gender Equality in Police Bodies; training mobile group experts; organizing and running training courses for investigators, investigative officers, Special Force Berkut officers, personnel of temporary holding centres, and so forth. Behind the words “and so forth” one had the work of members of more than 120 organizations which belong to public councils at regional and national level.

In 2010 the work of the Human Rights Public Council under the MIA was stopped and all appeals from its members to the MIA leadership were ignored, with refusal to cooperate with the many organizations whose members were in public councils.

Aware of the need to create and form an internal system for monitoring human rights, Minister Lutsenko, following his return to the post in January 2008, issued an order to create within the Minister’s Office a Department for the Monitoring of Human Rights in the Work of the Police.
The formation of the Department for the Monitoring of Human Rights, like the work of mobile groups previously, was positively assessed by the majority of national experts and international organizations. For three years in a row Ukraine reported on the fulfilment of its international human rights obligations specifically through the creation of that institution. Its achievements were not spectacular but this could not have been expected after a year and a half’s work. Nevertheless, among those achievements noted not only by the heads of departments and the Minister, but by external observers, was a move towards transparency of police bodies; a rebirth of trust; contact with organizations of civil society, as well as several thousand complaints and appeals from members of the public being objectively and impartially examined with the participation of aides to the Minister; improved conditions in temporary holding facilities and the inclusion in the vocabulary of police staff of the concept of human rights which they began paying attention to.

It is symbolic that virtually the first order issued by the present Minister of the MIA in March 2010 was that which dissolved the Department for Monitoring Human Rights in the Work of the Police. Activity linked with implementation of Ukraine’s domestic and international human rights commitments was overly and cynically destroyed.

The present regime prefers not to mention its destructive acts while this fateful list, containing only objective facts, can be continued. We can add the fate of the Department for Fighting Human Trafficking. This was created in 2005 by an Order issued by the same Yury Lutsenko, first with less power, than as a fully-fledged Department. This no longer exists within the MIA structure. As of the beginning of June 2011 no central executive body had been assigned duties with respect to countering and preventing human trafficking and providing assistance to victims of the crime. This will mean that the function of countering human trafficking is lost at both regional and local levels since there is no structure responsible for coordinating activities and for implementing a national referral mechanism for trafficking victims in order to provide them with comprehensive assistance and carry out preventive work. The Department of Criminal Police in Juvenile Matters has also been dissolved despite the fact that its work is regulated by Ukrainian laws.

No work is being carried out within the MIA on countering racism and xenophobia. This was insufficient before also, but now this area is effectively ignored. The departments for investigating hate crimes and crimes against foreign nationals or by them have been dissolved. Peaceful public gatherings are dispersed in rough manner, with the police wielding the political stick for those in power. The right to privacy is violated, as are many other rights

In concluding, we would remind high-ranking Ukrainian officials responsible for systematic violations of human rights in Ukraine that they must answer for their actions and not only to the Ukrainian people, but also to the international community since human rights are not an internal matter for any country.

Both the status of a democratic nation and the position of a country which presently chairs the Council of Europe Committee of Ministers oblige the government of Ukraine to be highly responsible on issues of internal policy since even insignificant false moves will cause considerable damage to the country’s image. Adherence to the principle of the rule of law is one of those opportunities for the Government to demonstrate to the European community their professional ability to chair the largest country in Europe. We hope that public officials and the President will prove ready to use this opportunity for the good of the people of Ukraine.