The trial began in Grodno, Belarus on 14 June of Andrzej Poczobut, correspondent for the Polish newspaper Wyborcza and activist of the Union of Poles in Belarus.  He is charged with slandering and insulting President Lukashenko and could face up to 4 years imprisonment if convicted.

“He is a symbol of independent journalism and his trial is intended as a warning for others. There aren’t enough people like Andrzej Poczobut in the opposition because he is a very courageous man”, Alexander Milinkievich, one of the leaders of the Belarusian opposition said outside the court.

Milinkievich was supposed to be one of the witnesses but the judge refused to allow his testimony. Little is known about the trial which is taking place behind closed doors. The lawyers and Prosecutors had to sign undertakings not to divulge anything.

Gazeta Wyborcza however says that from leaks they have learned that Judge Vitaly Letsko has automatically rejected all applications from the accused journalist and his lawyers. He rejected the application to make the trial open and to re-examine two experts whose assessment of Poczobut’s texts form the basis of the prosecution’s case.

There were around 100 of Poczobut’s supporters outside the court including his wife Oksana and daughter Yana who should have been celebrating her 12th birthday on Tuesday together with her father. Andrzej  and Oksana Poczobut also have a one-year-old son.

Associated Press reports that as police escorted Poczobut into the courthouse, he held up two fingers in a "V, " a sign for victory that is reminiscent of Poles’ fight for democracy and independence in the 1980s.
Poczobut is facing charges not only for his stories in the Polish newspaper but also for what he wrote on a Belarussian opposition website and in his own blog. Some of the material in the indictment does not even name Lukashenko  (see the links below for more information)

The trial was adjourned until Friday.

From reports at www.wyborcza.pl and Associated Press (the photo of Oksana and Yana Poczobut are from AP) 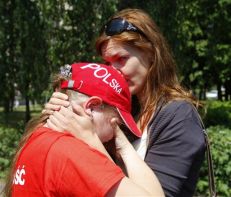