The Minsk City Court on Friday 17 June upheld the convictions of the leader of Youth Front, Zmitser Dashkevich, and Edward Lobau, a Youth Front activist.

On 24 March Dashkevich was sentenced to 2 years and Lobau to 4 years imprisonment for “malicious hooliganism”. They are alleged to have assaulted two people on the day before the presidential elections on 19 December 2010.

Most opposition groups believe that they were detained deliberately to stop their involvement in protest over elections criticized throughout the democratic world as rigged.

The two people who claimed to have been assaulted gave testimony from a room next door to where the hearing was taking place. In their address to the court, both young men called the detention deliberate provocation. 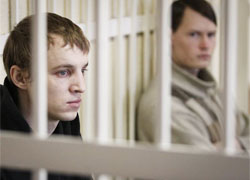