“Kyiv Post has been killed”. Journalists cry foul as crucial Ukrainian English-language newspaper abruptly closes Zahoor: Brian Bonner is to remain Editor of Kyiv PostYelena Bonner speaks out in defence of Peter VinsTo Yelena Bonner on her 85th birthdayYelena Bonner: The authorities are trying to destroy the Sakharov PrizeGreetings on Victory Day
• Topics / Dissidents and their time
• Topics / We remember 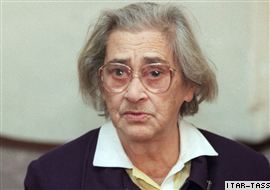 Yelena Bonner, human rights defender, publicist and widow of Andrei Sakharov, has died after a long illness.  Andrei Grigorenko who conveyed the news, expresses his condolences to her family which we can only echo.  She was a very special and very courageous person and her passing is a great loss.

Yelena Bonner was born on 15 February 1923 in the Turkmen SSR.  Her parents were arrested in 1937.  Her father was shot the following year and her mother sentenced to 8 years imprisonment.  Both were rehabilitated in 1954

Yelena Bonner volunteered and served as a nurse in World War II and was twice wounded. She later became a paediatrician.

She was briefly a member of the Communist Party, but left it in 1968 over the crushing of the Prague Spring.

From the 1960s through the 1980s she took part in protests against the persecution of dissidents and helped to circulate accurate information about politically motivated trials.  In 1974 she established a fund to help children of political prisoners in the USSR

She was subjected to numerous searches and detentions for her human rights activities and her son and daughter (from her first marriage) were expelled from their institutes and finally driven to emigrate to the USA.

In 1972 she married Andrei Sakharov and was to represent him in 1975 at the Nobel Peace Prize Ceremony in Oslo.  She was a founding member of the Moscow Helsinki Group in 1976 and active until the Group was forced to disband in 1982.

After Sakharov was exiled to Gorky (now Nizhny Novgorod) in 1980 until her own arrest in 1984 she provided vital contact between her husband and both Moscow and the West.  She was however herself convicted in August 1984 of “systematic dissemination of false information defaming the Soviet state and social system” and sentenced to 5 years exile in Gorky.

On their return to Moscow in 1987, they became involved in human rights work and organizations like Memorial.  Following Sakharov’s death in 1989, she also chaired the Sakharov Foundation.

She also “took an active part in the work of Grigorenko Foundation where we will miss her help and friendly advice”.

She leaves a daughter, Tatyana, son Alex and grandchildren.  And a huge number of people who felt the deepest respect for her courage and commitment.