On the occasion of Mikhail Khodorkovsky’s Birthday, his son, Pavel, has written a powerful article in the German news magazine ‘Focus’. The article is found below:

My father’s birthday is on Sunday and he won’t be able to celebrate. Not even a little bit. Because the authorities were silent for days about which prison he’s being moved to, this year we couldn’t even send him a package with a few sweets, as we usually do. I will be thousands of kilometres away from him, here in the United States. After he was arrested, my father begged me not to return to Russia. Out of fear that something would happen to me. I haven’t seen him since 2003.

I remember one of the last birthdays that we celebrated together. He spoke about his future on that occasion. He told me that he would retire from business life when he was 45 and would then only work for his foundation "Open Russia", in the field of education. Prison destroyed all of these plans.

My father visited me in the United States in 2003, and he returned to Russia, even though he knew that his arrest was impending. But he didn’t want to abandon his friend Platon Lebedev, who was already in prison. And he wanted to prove his innocence in court. He certainly had no illusions about the Russian judicial system. But that everything would turn into such a farce and that arbitrariness would reach such proportions that any thought of justice became absurd - he never believed that.

Although I have only been able to keep in contact with my father by letter over the last eight years, he still influences me to this very day. He taught me that I must make all important decisions in life on my own. Even when I was still very young, he never simply forbid me to do something - he always explained why something was bad and dangerous. And he taught me to always remain calm. He never raises his voice. On one of his first trips to the United States he was fascinated that people here smile so much. He decided to do the same. That could even be seen during the show trial as he stood there smiling most of the time. Sometimes he even laughed because the accusations were simply so absurd.

These eight years in prison have not been able to break my father. Even people who once did not like him now respect him. I am extremely proud of him. And I am deeply saddened that he couldn’t be at my wedding and that he has never been able to see my daughter, his granddaughter. 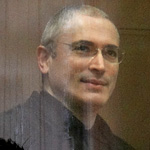