Court orders Simferopol Authorities to grant permit for Soborna MosqueMustafa Dzhemiliev: Pogroms against the Crimean Tatars likely in the near futureCrimean authorities present the Crimean Tatars with an ultimatumCrimean law enforcement officers target a Mejlis activistWill the Crimean authorities override the President’s word?Spiritual Directorate of the Muslims of the Crimea condemns Supreme Court ruling on Soborna MosqueLet’s build our places of worship together!Muslims win their court case for the Soborna MosqueAfghanistan War veterans in the Crimea come out in support of the Soborna MosqueLawlessness unto themselvesPolice Chief slams attempts at provocation by the Simferopol City CouncilCourt upholds Crimean Muslims over land for the Soborna MosqueCrimean Tatars warn Council of Europe of possible conflict in the CrimeaCrimean Prosecutor protests against the actions of the Simferopol City Council.For a tolerant CrimeaCrimean Muslims begin protest over obstruction in building a Mosque in SimpferopolYet another Muslim cemetery desecrated in the CrimeaMustafa Dzhemiliev: Assault on Kurultay representative threatens Crimean stabilityWeekend attacks fuel inter-ethnic friction in the CrimeaProtest over religious discrimination in the Crimea
• Topics / Freedom of conscience and religion
• Topics / Deported peoples

The Spiritual Directorate of the Muslims of the Crimea informs that there are no longer any impediments to building a Great Soborna (Assembly) Mosque in the Crimea. 7 years after beginning the procedure for getting building permission for the Mosque the Crimean Muslims have received the State Act of entitlement to indefinite use of a land site on the outskirts of Simferopol. However the Spiritual Directorate does not yet know when the building work will begin.

Commencement of construction is being delayed by two factors. According to Aider Ismailov, Deputy to the Mufti of the Crimea, time is needed to resolve them.  The first are the various bureaucratic procedures linked with design of the Mosque, and the other is the considerable cost.  Attempts to raise the money are already underway.

Aider Ismailov says that they have managed over the last half year to achieve the main thing, this being the political decision on building it and receiving the land documents. They can now announce a tender for architectural design, in which, he says both Ukrainian and foreign architects will take part.

Analysts agree that the permit to build the Mosque has had a major influence on improving the ethnic – political and inter-faith situation in the Crimea. However many problems remain unresolved with requests for the return of several dozen other places of worship still not heeded.

In addition, while there seems a certain improvement in the attitude of the regional authorities to the needs of Crimean Muslims, the position of congregations of the Ukrainian Orthodox Church attached to the Kyiv Patriarchate and the Ukrainian Greek Catholic Church which are fairly large and in all major cities, remains uncertain.

The authorities have not allocated even one land site for these Churches. The Yalta Greek Catholic Church began procedure to be allocated a land site for their church 8 years ago and have still not received permission despite all documents having been provided. They have been forced to find the money and buy another plot of land. The first autonomous Greek Catholic Church, the Holy Trinity Church, built with the support of the Yalta Tokachi family, was consecrated last week.

From a report at http://radiosvoboda.org/content/article/24242217.html

The struggle to build the Soborna Mosque lasted a long time. The Crimean Muslims first approached the authorities with the request for land to be allocated back at the beginning of the 1990s.

In 2004 the Simferopol City Council finally approved the allocation of 2.5 hectares on the outskirts of the city, on the road leading to Yalta.

The relevant plan and documents were organized, and Muslims collected almost 300 thousand bricks, one for each Muslim in the Crimea, yet, as reported, the City Council suddenly cancelled its own decision. 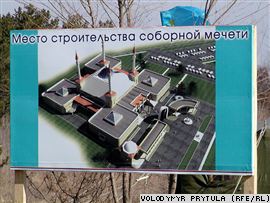