Former Minister under Tymoshenko, Valery Ivashchenko goes on hunger strikeMEP Hard-hitting Questions about Highly Selective ProsecutionsCall on EU to get tough with new Ukrainian leadershipUkrainian World Congress expresses grave concern over political prosecutionsEuropean Parliament Resolution on Tymoshenko CaseAppeal to the Leaders of Democratic CountriesOn the Criminal Prosecution of Yury LutsenkoSurvey: Almost 50% see political repression by the regimeMore high-level warnings against persecution of the oppositionTymoshenko prevented from visiting voters within UkraineUkrainian TV Patch Up Job on PACE RecommendationsFreedom House Concerned by Detention of Yulia TymoshenkoEU sees political motives “in the cases of Yulia Tymoshenko and other members of the former government”Situation with Tymoshenko’s prosecution to be discussed during PACE talksEuropean Parliament President speaks of political nature of Tymoshenko’s caseContradictory statements from Prosecutor about court order for Tymoshenko’s detentionYulia Tymoshenko detainedBetrayal through SilenceCourt extends Yury Lutsenko’s imprisonmentLutsenko alleges attempts to blackmail him using family visits
• Topics / Politics and human rights
• Topics / The right to a fair trial

BBC: Tymoshenko on trial in Kiev for abuse of power 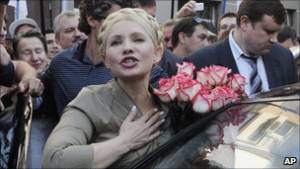 Ukraine’s former prime minister and heroine of the 2004 Orange Revolution Yulia Tymoshenko has gone on trial in Kiev for abuse of power.

Ms Tymoshenko has dismissed the charges, which concern natural gas contracts with Russia, as revenge by her rival, President Viktor Yanukovych.

She lost the premiership in March 2010 following a vote of no confidence.

Ms Tymoshenko has asked the European Court of Human Rights to decide if the charges are politically motivated.

About 1, 000 of her supporters gathered outside the court in Kiev, which was ringed by police, the AFP news agency reports.

"This is a farce and circus and not a court hearing, " Ms Tymoshenko told the judge, according to AFP.

Investigators say a 10-year gas contract agreed with Russia in January 2009 was ruinous for the Ukrainian economy and that Ms Tymoshenko did not have cabinet approval to sign it.

The charges are not the first to be brought against the former prime minister.

The US and the EU have condemned the charges against Mrs Tymoshenko and some of her allies as selective prosecution of political opponents.

The charges carry a sentence of seven to 10 years’ imprisonment.

If convicted, Mrs Tymoshenko would be out of contention for parliamentary elections due in October 2012. The next presidential election is scheduled for 2015.