BBC: Tymoshenko on trial in Kiev for abuse of powerFormer Minister under Tymoshenko, Valery Ivashchenko goes on hunger strikeMEP Hard-hitting Questions about Highly Selective ProsecutionsCall on EU to get tough with new Ukrainian leadershipUkrainian World Congress expresses grave concern over political prosecutionsEuropean Parliament Resolution on Tymoshenko CaseAppeal to the Leaders of Democratic CountriesOn the Criminal Prosecution of Yury LutsenkoSurvey: Almost 50% see political repression by the regimeMore high-level warnings against persecution of the oppositionTymoshenko prevented from visiting voters within UkraineUkrainian TV Patch Up Job on PACE RecommendationsFreedom House Concerned by Detention of Yulia TymoshenkoEU sees political motives “in the cases of Yulia Tymoshenko and other members of the former government”Situation with Tymoshenko’s prosecution to be discussed during PACE talksEuropean Parliament President speaks of political nature of Tymoshenko’s caseContradictory statements from Prosecutor about court order for Tymoshenko’s detentionYulia Tymoshenko detainedBetrayal through SilenceCourt extends Yury Lutsenko’s imprisonment
• Topics / Politics and human rights
• Topics / The right to a fair trial

The trial began at the Pechersky District Court in Kyiv on Friday of Yulia Tymoshenko. The former Prime Minister, presidential candidate and leader of the main opposition party, is accused of “unlawfully signing gas accords in 2009”.

Thousand of Ms Tymoshenko’s supporters came from many regions and surrounded the area around the court. Hundreds of law enforcement officers had in the night blocked the entrance to the court, using iron fences.  There were also many coaches nearby with Berkut Special Force officers.  There were also opponents of Tymoshenko who tried to drown out her address during the break by playing music very loud.

Tymoshenko’s supporters held a spontaneous rally, calling for a fair trial and for the overthrow of the Yanukovych regime.

The courtroom was from morning full of participants, journalists, parliamentary deputies, diplomats, as well, the opposition claims, as dozens of unidentified individuals in the same uniform who had entered the courtroom long before the trial began.

It was crowded and difficult to breathe while people’s clothes were soon wet from the sticky heat. European Commission Ambassador Jose Manuel Pintu Teisheira who was present stressed that the European Union was following the trial very closely.

“We are giving serious attention to this case. In 2009 Europe had problems with getting gas and Yulia Tymoshenko as Prime Minister found a solution which made it possible to renew the supply of gas to the EU.  We remember well what role was played and will be following the trial. I can’t give a political assessment of this case, however the conditions in which the trial is taking place, are inhuman”

Yulia Tymoshenko herself spoke of a political parody of a trial.

“Today a true parody of a trial, which was ordered, organized and provided for by Yanukovych is beginning”. She said that it was a reprisal against her as the main opponent of the regime.

Tymoshenko’s lawyer Serhiy Vlasenko told the BBC Ukrainian Service that despite the statements from the Prosecutor General, the trial was not open and it was hard to expect a just ruling.

The court rejected Tymoshenko’s application for the withdrawal of Judge Rodion Kiryeev. The opposition point out that this Judge, who is presiding over the trial, was transferred to the Pechersky Court by Presidential Decree for only 5 years which they see as keeping him dangling as a form of pressure. The Judge himself denies any link with the President’s Administration. 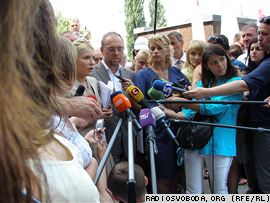