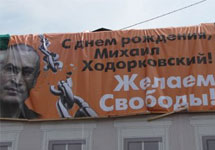 Around 10 demonstrators taking part in a rally to mark Mikhail Khodorkovsky’s 48th birthday were detained in Moscow on Sunday.  According to the radio station Echo Moskvy, there were police already waiting on Arbat (St) when the demonstrators arrived.. Around 300 people walked from Arbat to the metro station Smolenskaya, holding portraits of Khodorkovsky and balloons. Then from the roof of one of the buildings a banner was lowered reading “Happy Birthday Mikhail Khodorkovsky! We wish you your freedom!”  The participants also dispersed leaflets with Khodorkovsky’s Final Speech to the court and had a salute, after which the police began detaining them.

There was a similar action on Chystoprudny Boulevard, as well as in St Petersburg.

In London there was a demonstration on Trafalgar Square, with the movement “Speak Louder” collecting signatures for a petition in support of Khodorkovsky and Lebedev. The international committee “For a Democratic Russia” also held a demonstration in New York.

This was Mikhail Khodorkovskys’s eighth year in captivity since being arrested in 2003.  He was widely seen as a potential rival to Vladimir Putin.