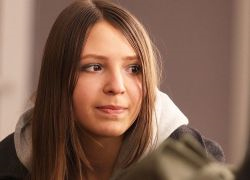 Paulina Kuryanovych was one of the many who took part in the latest silent protest actiion in Minsk. The “European Belarus” activist has been imprisoned for 15 days charged with “hooliganism”.  According to Charter 97, the trial was behind closed doors. The sentence was passed by Judge Pavlyuchuk.

During Tuesday’s silent protest in Minsk more than 150 people were detained.  Some had protocols drawn up against them for administrative offences. The hearings took place on Wednesday in various courts in Minsk.