US State Department: On the Prosecution of Ukrainian Opposition LeadersEuropean Commission Ambassador calls conditions of Tymoshenko trial inhumanBBC: Tymoshenko on trial in Kiev for abuse of powerFormer Minister under Tymoshenko, Valery Ivashchenko goes on hunger strikeMEP Hard-hitting Questions about Highly Selective ProsecutionsCall on EU to get tough with new Ukrainian leadershipUkrainian World Congress expresses grave concern over political prosecutionsEuropean Parliament Resolution on Tymoshenko CaseAppeal to the Leaders of Democratic CountriesOn the Criminal Prosecution of Yury LutsenkoSurvey: Almost 50% see political repression by the regimeMore high-level warnings against persecution of the oppositionTymoshenko prevented from visiting voters within UkraineUkrainian TV Patch Up Job on PACE RecommendationsFreedom House Concerned by Detention of Yulia TymoshenkoEU sees political motives “in the cases of Yulia Tymoshenko and other members of the former government”Situation with Tymoshenko’s prosecution to be discussed during PACE talksEuropean Parliament President speaks of political nature of Tymoshenko’s caseContradictory statements from Prosecutor about court order for Tymoshenko’s detentionYulia Tymoshenko detained
• Topics / Politics and human rights
• Topics / The right to a fair trial

While Lutsenko criticized the court, his property was being frozen 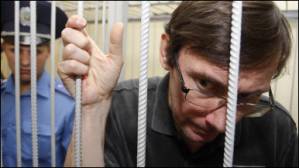 A part of the property of both former Prime Minister Yulia Tymoshenko and former Minister of Internal Affairs Yury Lutsenko has been frozen.  This was announced by the Deputy Chief Prosecutor Mykhailo Havrylyuk, but he refused to say what amount Yulia Tymoshenko’s property which has been frozen was estimated to be worth.  He was less reticent about Yury Lutsenko, saying that the amount was over 1, 7 million UAH.  Havrylyuk pointed out that according to the claim that the MIA have laid against Lutsenko, the loss he supposedly caused the State came to 978 thousand.

The same day at the latest court hearing, Yury Lutsenko accused the Ukrainian authorities of political persecution of the opposition.

He asserted that membership of the Party of the Regions protects those who should answer before the law from criminal liability.

During the court hearing at the Pechersky District Court in Kyiv Yury Lutsenko also stated that additional facts had emerged which could demonstrate the presiding judge, Serhiy Vovk’s lack of objectivity. He alleged that the Judge is himself facing criminal liability and suggested that he’d been given to understand that if he didn’t imprison Lutsenko, he would himself end up inside.

He added that the criminal investigations initiated against the Judge by the police while Lutsenko was Minister were grounds for Vovk hating him.

Lawyer Oleksy Bahanets applied for the examination of the case to be postponed until the Prosecutor had provided material on the criminal investigation initiated against the judge.

The court rejected the application for withdrawal of Judge Vovk and for trial by jury.

The hearing was broadcast live on Channel 5 and online.

Meanwhile Prosecutor Lilia Frolova who is leading the prosecution in the trial of the former Prime Minister, presidential candidate and present leader of the Batkivshchyna Party, claims that in the gas case against Tymoshenko, there were one and a half billion UAH in losses.

She said that the article which Tymoshenko is accused under envisages a sentence of up to 10 years imprisonment, and does not mention a conditional sentence.

Tymoshenko’s lawyer, Serhiy Vlasenko in a press interview said that judging by the way the trial was taking place, the former Prime Minister could be sentenced.

“Closing their eyes to the lack of any proof of guilt in the file material, they will pass a sentence of from 7 to 10 years imprisonment”.

The Prosecutor also informed that ex-President Yushchenko is among the people who are to be questioned during the court examination. She stated that the court could use force if he did not come himself.

From a report by the BBC Ukrainian Service