European Commissioner calls on Verkhovna Rada to use international experience in legislative workNew criminal investigation against TymoshenkoJudge is in a hurry with Tymoshenko trialPolish Ambassador: Prosecuting opposition politicians can lead to bad habitsTime to name names, Ms ClintonWhile Lutsenko criticized the court, his property was being frozenUS State Department: On the Prosecution of Ukrainian Opposition LeadersEuropean Commission Ambassador calls conditions of Tymoshenko trial inhumanBBC: Tymoshenko on trial in Kiev for abuse of powerFormer Minister under Tymoshenko, Valery Ivashchenko goes on hunger strikeMEP Hard-hitting Questions about Highly Selective ProsecutionsCall on EU to get tough with new Ukrainian leadershipUkrainian World Congress expresses grave concern over political prosecutionsEuropean Parliament Resolution on Tymoshenko CaseAppeal to the Leaders of Democratic CountriesOn the Criminal Prosecution of Yury LutsenkoSurvey: Almost 50% see political repression by the regimeMore high-level warnings against persecution of the oppositionTymoshenko prevented from visiting voters within UkraineUkrainian TV Patch Up Job on PACE Recommendations
• Topics / Politics and human rights
• Topics / The right to a fair trial
• Topics / Freedom of expression

The court hearing on Wednesday in the trial of Yulia Tymoshenko, former Prime Minister and leader of the main opposition party Batkivshchyna – BYUT, ended in scandal and a brawl involving police and National Deputies. The judge accused Tymoshenko of infringing order and expelled her. The Deputies who were hurt in the scuffle, as well as the head of the court, want to initiate a criminal investigation over the incident. Independent experts see it as the collapse of Ukraine’s judicial system.

The hearing began with a row after Yulia Tymoshenko refused to stand and address the Judge, Rodion Kiryeev as “your honour”, this being demanded by the Criminal Procedure Code. The Judge accused her of comment of court.

He also agreed with the Prosecutor and prohibited videoing and direct broadcast of the hearing while witnesses were being heard.

Tymoshenko’s lawyer, in response, demanded the Judge’s withdrawal from the case, but this was dismissed.

Yulia Tymoshenko mentioned the call from European institutions to stop what she called unlawful persecution of the opposition.  She cited the statement of Stefan Fule “who once again reminded the Ukrainian government that political repression against myself and other members of the opposition and former government are unacceptable”. She accused President Yanukovych of being behind the ban of direct transmission of the trial.

BYUT deputies began arguing with the Judge over the ban and two were ordered to leave the court. One left himself because he began feeling unwell, while Special Force Berkut officers tried to eject the other.  During the scuffle both National Deputies and journalists were injured, while the video camera of one television channel was broken.

Yulia Tymoshenko blamed the court for the Berkut interference and called the judge a “monster”., after which Kiryeev ordered her also to leave the courtroom. 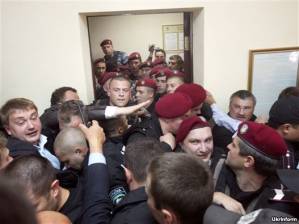