Tymoshenko expelled from courtroom, Deputies manhandledEuropean Commissioner calls on Verkhovna Rada to use international experience in legislative workNew criminal investigation against TymoshenkoJudge is in a hurry with Tymoshenko trialPolish Ambassador: Prosecuting opposition politicians can lead to bad habitsTime to name names, Ms ClintonWhile Lutsenko criticized the court, his property was being frozenUS State Department: On the Prosecution of Ukrainian Opposition LeadersEuropean Commission Ambassador calls conditions of Tymoshenko trial inhumanBBC: Tymoshenko on trial in Kiev for abuse of powerFormer Minister under Tymoshenko, Valery Ivashchenko goes on hunger strikeMEP Hard-hitting Questions about Highly Selective ProsecutionsCall on EU to get tough with new Ukrainian leadershipUkrainian World Congress expresses grave concern over political prosecutionsEuropean Parliament Resolution on Tymoshenko CaseAppeal to the Leaders of Democratic CountriesOn the Criminal Prosecution of Yury LutsenkoSurvey: Almost 50% see political repression by the regimeMore high-level warnings against persecution of the oppositionTymoshenko prevented from visiting voters within Ukraine
• Topics / Politics and human rights
• Topics / The right to a fair trial
• Topics / Freedom of expression 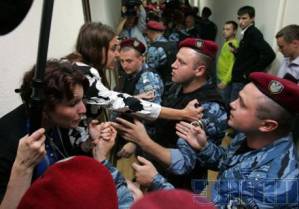 On 6 July officers of the MIA Special Force Berkut unit burst into the courtroom of the Pechersky District Court in Kyiv where the trial is taking place of former Prime Minister Yulia Tymoshenko and used physical force against journalists.

According to the information agency UNIAN, the Berkut officers, without any explanation roughly shoved journalists, pushing them out through the corridor out of the courtroom. They ignored objections that they were violating at least three articles of the Criminal Code – 171 in obstructing the professional activities of journalists, 364 (abuse of power or official position) and 365 (exceeding authority). The Berkut officers simply told them to complain to the police if they thought the force was unlawful.

According to TVi correspondent Anastasia Stanko, it all began when Judge Kiryeev tried in vain to eject National Deputy from BYUT Yevhen Suslov. After a break was announced, a police officer asked the journalists to leave the courtroom for 10 minutes, supposedly to get some air in.

“Since two cameras remained for broadcasting the hearing, I went into the corridor together with a journalist from Chornomorka and a lot of cameramen – to film what would happen, because we expected Suslov to be removed. My colleagues and I sat on the bench near the metal tourniquet. Suddenly Berkut officers appeared from somewhere – around 70-80 and filled the whole corridor. …. There was a scuffle in the courtroom and you could hear Suslov shouting that he would leave himself. At that same moment the camera men began being pushed out, somebody pulled me off the bench and hurled me against somebody’s video, I scratched my hand. There was a terrible crush and lots of pushing. We were all pushed out to the staircase, we almost fell down it”.

Lawyer from the Institute for Mass Information, Roman Holovenko presumes that the Berkut officers were afraid that the journalists would film them removing National Deputies who have immunity for which formally they could be held to answer.