Courts in Belarus have begun hearing cases and imposing short jail sentences and fines against some of the hundreds of people who were detained during antigovernment demonstrations in Minsk and other cities on July 6.

Rights activists say some 130 people were tried in Minsk on July 7.

Alesia Jakubouskaja of the rights group Vyasna ("Spring"), who was monitoring the trials in the capital, told RFE/RL’s Belarusian Service that "there were a couple of people who got five- to 7-day [jail] sentences, but most got 10 or even 15 [days]."

"So far, only one woman, born in 1943, was given a fine, " Jakubouskaja said. "The same was true in all [the other] courts. And those convicted in the Zavodski [district] court will be taken to Zhodzina jail, because there’s no longer any room at Akrescina [jail]."

According to Vyasna’s estimates, several thousand people across the country participated in the July 6 protests, with the authorities arresting at least 400 people, including some 180 in the capital and 220 in other regional centers.

According to the Belarusian Journalists Association, about 25 journalists were among those detained. The association said on its website that most reporters were released after being harassed and told not to take pictures or shoot videos.

The protests took place in response to a call on the Internet by the Revolution Through the Social Network group -- the latest in a series of such Wednesday protests.

As in previous demonstrations, protesters did not chant slogans or brandish banners but merely stood in silence.

RFE/RL’s Belarus Service reported that designated meeting points were cordoned off and under heavy police guard. Plainclothes police took away people who gathered at the venues, including one young man who spoke to an RFE/RL correspondent as both were being taken to a police station.

He said it was "hard to say why" he was detained. "I came out of the library at about 7:45 as it was closing. I have my membership card with me. I heard people shouting. I came up closer and then an athletic-looking man grabbed my arm and said, ’Go away.’ I said, ’OK, where should I go?’ He brought me here, they put me inside, so here I am."

Highlighting the harassment that journalists are facing, the RFE/RL correspondent was later released, detained again, and re-released.

A video clip showed plainclothes men putting a lone protester into an unmarked minivan and protesters clapping outside the National Library in Minsk as a man asked, "Why are you taking this person?"

Vyasna spokesman Valentin Stefanovich told AP that the authorities had adopted a "new tactic, " detaining people before the protests start.

Internet activist Vyecheslav Dianov said the rallies will continue, telling AFP, "We will be thinking of people’s safety and changing our strategy."


President Alyaksandr Lukashenka launched a crackdown on the opposition after mass protests erupted following his disputed reelection in December.

Speaking in the town of Shlov on July 7, the man dubbed by some "Europe’s last dictator" called members of the opposition "enemies of the people."

Belarusian courts are still processing cases of protesters from the previous rally on July 3, which likewise saw hundreds of arrests.

Rights activists say more than 1, 700 protesters have been tried over the past month and given fines of up to $200 and/or jail terms of between five and 15 days on charges of petty hooliganism, disrupting public disorder, or taking part in unsanctioned demonstrations.

Meanwhile, the U.S. House of Representatives approved a bill to support democracy and human rights in Belarus. The Belarus Democracy and Human Rights Act of 2011, approved late on July 6, calls for the release of all political prisoners and refuses to recognize the results of December’s presidential election, widely seen as fraudulent.

The bill supports the expansion of existing sanctions against Minsk to include the denial of entry visas to members of the Belarusian security services who have participated in the recent crackdown on opposition leaders, journalists, and peaceful protesters.

The bill also would require the U.S. administration to provide more details to lawmakers on Minsk’s arms sales, censorship of the Internet, and other activities.

It also calls for continued support of radio, television, and Internet broadcasting to Belarus via Radio Free Europe/Radio Liberty, Voice of America, and the satellite television station Belsat.

In a statement, the author of the bill, Republican Representative Chris Smith, said, "This bill encourages those struggling for decency and basic rights against the overwhelming pressures from the antidemocratic regime."

Before being signed into law, the bill must be approved by the Senate. It is expected to pass.

The European Union has joined the United States in imposing sanctions on Belarus, including assets freezes and travel bans on a number of top officials, in response to the postelection crackdown.

On July 6 in Moscow, dozens of people clapped hands outside the Belarusian Embassy in a show of solidarity with the protesters.

"We know that people who are not happy with the Lukashenka regime hold or try to hold such actions each Wednesday in Belarus, " the head of the Russian human rights group Memorial, Oleg Orlov, told Reuters.

"We also know how violently and harshly those peaceful actions are dispersed there. Today, thank God, we managed to hold such action without being dispersed here in Moscow, although we were not sure that our authorities would not do the same as those in Belarus." 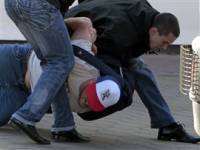