Journalists prevented from covering Tymoshenko trialBerkut uses force against journalists during Tymoshenko trialTymoshenko expelled from courtroom, Deputies manhandledEuropean Commissioner calls on Verkhovna Rada to use international experience in legislative workNew criminal investigation against TymoshenkoJudge is in a hurry with Tymoshenko trialPolish Ambassador: Prosecuting opposition politicians can lead to bad habitsTime to name names, Ms ClintonWhile Lutsenko criticized the court, his property was being frozenUS State Department: On the Prosecution of Ukrainian Opposition LeadersEuropean Commission Ambassador calls conditions of Tymoshenko trial inhumanBBC: Tymoshenko on trial in Kiev for abuse of powerFormer Minister under Tymoshenko, Valery Ivashchenko goes on hunger strikeMEP Hard-hitting Questions about Highly Selective ProsecutionsCall on EU to get tough with new Ukrainian leadershipUkrainian World Congress expresses grave concern over political prosecutionsEuropean Parliament Resolution on Tymoshenko CaseAppeal to the Leaders of Democratic CountriesOn the Criminal Prosecution of Yury LutsenkoSurvey: Almost 50% see political repression by the regime
• Topics / Politics and human rights
• Topics / The right to a fair trial

Yet another criminal case against Yulia Tymoshenko 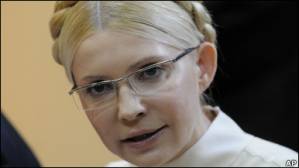 Yulia Tymoshenko may again be accused of exceeding official powers. The former Head of the State Property Fund [the Fund], Valentina Semenyuk-Samsonenko, who informed the press of the court’s ruling, had appealed against an instruction issued to the Fund in October 2008. In accordance with that instruction in the summer of 2009 the Fund made amendments to the conditions for the sale of Kryvorizhstal, with respect to the enforcement by the company of its investment obligations.  According to the additional agreement, some of these investment obligations were deferred.

However the then Acting Head of the Fund, Dmytro Parfenenko stated that the company’s owner had agreed to fully ensure fulfilment of social obligations envisaged by the contract.

Ms Semenyuk-Samsonenko asserts that the former Prime Minister’s instruction which sanctioned amendments to the contract violated Ukrainian legislation on privatization and management of State-owned property, as well as the Constitution.

Ms Semenyuk-Samsonenko also stated that the court’s ruling was that the cases against Tymoshenko regarding unlawful amendments to the contract of sale of Kryvorizhstal and on exceeding official duties should be combined.

Kryvorizhstal was sold in 2005 for 4.8 billion USD as the result of reprivatisation following the Orange Revolution.

Another criminal investigation against the former Prime Minister, presidential candidate and leader of the main opposition party Batkivshchyna – BYUT is underway on charges of exceeding power and official authority with respect to the gas contracts with Russia at the beginning of 2009.