A senior European Union diplomat for Eastern Europe says the latest crackdown on protests in Belarus is a sign the regime is losing its grip.

Miroslav Lajcak, whose boss is EU foreign-policy chief Catherine Ashton, made the comment in an interview with RFE/RL days after Belarusian police detained hundreds of people taking part in antigovernment rallies.

Lajcak also defended the EU’s measures against President Alyaksandr Lukashenka’s regime, saying they were working despite the latest crackdown.

Some 400 people were detained country-wide during protests on July 6 against the government and a deepening economic crisis, with a similar number rounded up on July 3, Independence Day.

Lajcak said he saw the latest actions, which came about when people expressed their discontent by clapping their hands, as a sign that Lukashenka is losing his hold on the country.

"It sends a very clear signal that the regime is losing control, particularly because of the fact that these latest demonstrations are not politically motivated but they are motivated by the dire economic and social situation for people, " Lajcak said, "so that’s very significant what is happening right now in Belarus."

Lajcak in December last year became the managing director for Russia, the Eastern Neighborhood and the western Balkans in the EU’s new diplomatic corps, the External Action Service. Since then he has been busy crafting Brussels’ response to Minsk’s crackdown on the protests that followed Lukashenka’s disputed reelection in December.

The EU has blacklisted 192 people, including Lukashenka, who are under a travel ban and have had their assets frozen by Brussels.

The number of individuals on the list has grown continuously throughout 2011 as Belarusian courts jailed several opposition presidential candidates. Since its last revision in June, the list also targets three companies with close ties to Minsk.

Turning the screws on Lukashenka has so far not resulted in any lessening of the crackdown in Minsk. At least 130 people were sentenced last week alone to short prison sentences and fines for taking part in the latest protests.

Lajcak declined to speculate on whether EU foreign ministers will top up the sanctions list in response to the latest crackdown when they next meet in Brussels on July 18. But he defended the measures taken so far, saying they were working.

He said that the Belarusian opposition "appreciated" the measures, and they did not "deliver results overnight but there is no doubt that they are delivering results."

"There is no doubt that the regime is very well aware and feels all these measures and we are trying to calibrate our policies to be very clear on our messages with regard to the regime, " he added. "We are not going to engage with it unless it releases and rehabilitates all political prisoners."


Lajcak also dismissed Lukashenka’s recent offer to send political prisoners to the EU. "We are used to strange and funny and not serious statements from Lukashenka and this was one of them, " he said.

"What we want is a normalization of the situation in Belarus and adherence and respect to European values, respect for the rule of law, for the rights that are guaranteed to the citizens of Belarus by their constitution but not in real life, " Lajcak said.

"So it is not that the European Union wants to take this or that person out of Belarus and entertain [him] on our territory, it is about improving the conditions for life for citizens of Belarus. These are the signals and signs we are expecting from Belarus and we are not getting so far."

The External Action Service has so far refrained from taking other restrictive measures to punish Minsk, such as calling for a boycott of the 2014 Ice Hockey World Championship that Belarus is hosting or excluding the country from the Eastern Partnership, a political forum between the EU and six former Soviet republics.

With the Belarusian economy on the brink of collapse as inflation approaches 35 percent, Brussels has so far also stayed clear of interfering with Lukashenka’s request to the International Monetary Fund for a rescue loan.

Lajcak said any potential further step taken by the EU must consider its impact on the Belarusian population at large and not just focus on punishing the regime.

"In our effort we are trying to carefully calibrate the approach to be strict with the regime and with those who have personally engaged themselves in antidemocratic activities, and [at] the same time to make sure that we do not punish the citizens who are not guilty and are not responsible for the fact, " Lajcak said.

"So all the proposals we are discussing and which we are receiving from others are judged exactly from this perspective." 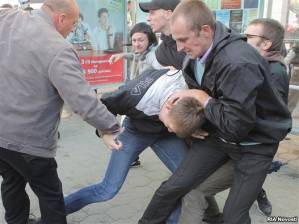