Polish Ambassador: Prosecuting opposition politicians can lead to bad habitsTime to name names, Ms ClintonWhile Lutsenko criticized the court, his property was being frozenUS State Department: On the Prosecution of Ukrainian Opposition LeadersEuropean Commission Ambassador calls conditions of Tymoshenko trial inhumanBBC: Tymoshenko on trial in Kiev for abuse of powerFormer Minister under Tymoshenko, Valery Ivashchenko goes on hunger strikeMEP Hard-hitting Questions about Highly Selective ProsecutionsCall on EU to get tough with new Ukrainian leadershipUkrainian World Congress expresses grave concern over political prosecutionsEuropean Parliament Resolution on Tymoshenko CaseAppeal to the Leaders of Democratic CountriesOn the Criminal Prosecution of Yury LutsenkoSurvey: Almost 50% see political repression by the regimeMore high-level warnings against persecution of the oppositionTymoshenko prevented from visiting voters within UkraineUkrainian TV Patch Up Job on PACE RecommendationsFreedom House Concerned by Detention of Yulia TymoshenkoEU sees political motives “in the cases of Yulia Tymoshenko and other members of the former government”Situation with Tymoshenko’s prosecution to be discussed during PACE talks
• Topics / Politics and human rights
• Topics / The right to a fair trial

Polish Member of the European Parliament, Marek Siwiec has written a letter to the court expressing concern over the continued detention of former Minister of Internal Affairs in Yulia Tymoshenko’s government, and leader of the People’s Self-Defence Party, Yury Lutsenko.

The letter (in Polish) reads:

“I the undersigned Marek Siwiec am asking the Supreme Court of Ukraine to reconsider the decision to remand Yury Lutsenko in custody.

I am convinced that remand in custody is an exceptional measure of restraint which must be used against a suspect only in the case of a real threat. It would seem that a milder measure could be chosen with respect to Yury Lutsenko, whose state of health leaves a great deal to be desired

The European Court of Human Rights in a number of judgements on this issue (Yagci and Sahin v. Turkey, 1995, Schesser v. Switzerland, 1979, Ireland v. UK, 1978 has stated unequivocally that long-term remand in custody is an infringement of the suspect’s rights”

I would assure the Court that it is not my intention to interfere in matters of Ukraine’s jurisdiction, merely to express my concern at Yury Lutsenko’s situation and to personally stand guarantor should the Court allow my application for another restraint measure to be used against the suspect. “ 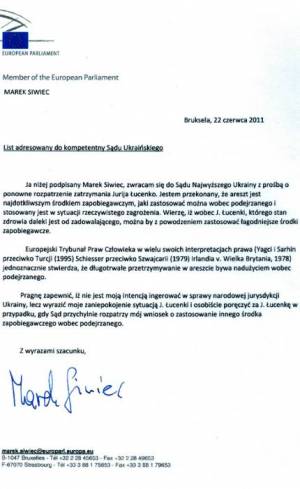