Yet another criminal case against Yulia TymoshenkoJournalists prevented from covering Tymoshenko trialBerkut uses force against journalists during Tymoshenko trialTymoshenko expelled from courtroom, Deputies manhandledEuropean Commissioner calls on Verkhovna Rada to use international experience in legislative workNew criminal investigation against TymoshenkoJudge is in a hurry with Tymoshenko trialPolish Ambassador: Prosecuting opposition politicians can lead to bad habitsTime to name names, Ms ClintonWhile Lutsenko criticized the court, his property was being frozenUS State Department: On the Prosecution of Ukrainian Opposition LeadersEuropean Commission Ambassador calls conditions of Tymoshenko trial inhumanBBC: Tymoshenko on trial in Kiev for abuse of powerFormer Minister under Tymoshenko, Valery Ivashchenko goes on hunger strikeMEP Hard-hitting Questions about Highly Selective ProsecutionsCall on EU to get tough with new Ukrainian leadershipUkrainian World Congress expresses grave concern over political prosecutionsEuropean Parliament Resolution on Tymoshenko CaseAppeal to the Leaders of Democratic CountriesOn the Criminal Prosecution of Yury Lutsenko
• Topics / Politics and human rights
• Topics / The right to a fair trial 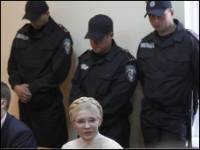 According to a study carried out by the Democratic Initiatives Foundation, an absolute majority of those asked see the prosecution of former Prime Minister and leader of BYUT, Yulia Tymoshenko as a demonstration of political repression and selective justice.  Out of the 52 respondents 40 called the case repression, and not one viewed it as an example of just judicial proceedings.

Among reasons suggested for criminal proceedings against Yulia Tymoshenko, the most frequently mentioned was an attempt by those now in power to prevent her taking part in the next elections. Most also saw it as an attempt to deflect attention from current socio-economic problems, while at the same time placing the blame for problems on the previous government.

What in your opinion was the real reason for initiating criminal proceedings against Yulia Tymoshenko?  (mark all that you consider important)

The respondents gave a generally negative assessment of the likely consequences of the trial of Tymoshenko for the internal political situation in Ukraine. The overwhelming majority believe that this trial will lead to the collapse of the justice system and undermine people’s faith in it. Only one person expressed the opposite view.

Most viewed as negative the influence of the courts on democratic processes, linked with an increase in authoritarian trends. Only one person thought that democracy would become stronger as a result of the trial. There was a split regarding the likely influence of the trial on the development of civil society in Ukraine: some saw it leading to it becoming more active while others expected no significant impact.

An absolute majority are convinced that the trial will not have major consequences for the Party of the Regions Batkivshchyna and the opposition as a whole. However among those respondents who believed there was an influence, most think that the trial will lead to a fall in support for the ruling Party of the Regions and growth in support for the opposition Batkivshchyna Party (21 respondents) while at the same time a fall in the role of the opposition as a whole.

The effect on international relations was seen as being extremely negative. Not one respondent predicted any positive changes to Ukraine’s international image, the negotiations between Ukraine and the EU on signing an Agreement of Association; the investment climate; and the authority of the Ukrainian regime in the West. Only 3 respondents envisaged the possibility of an improvement of Ukraine’s standing in Russia.

Among other potential consequences of the trial of Yulia Tymoshenko, some respondents mentioned a worsening in relations with the West and an intensification of Ukraine’s isolation, as well as Ukraine’s moving further into Russia’s sphere of interests.

From the report at: http://dif.org.ua/ua/press/jkojerogjoj