Tymoshenko once again removed from her own trial 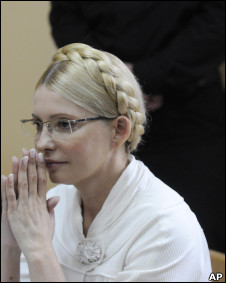 As with Yury Lutsenko, Minister of Internal Affairs in Tymoshenko’s government, although on entirely different charges, the indictment against Yulia Tymoshenko is being read out in the defendant’s absence.

Judge Kiryeev had Ms Tymoshenko removed from the courtroom for what he called content for the court proceedings and numerous infringements of the law.

She was removed for one hearing which was also demanded by the Prosecutor.

At that time Judge Kiryeev permitted video broadcast of the indictment being read about, however he soon changed his mind and prohibited the use of videos or camera.

This was the same as happened on 14 July in the same Pechersky District Court  when Judge Vovk evicted Yury Lutsenko from his trial.

Since Yulia Tymoshenko came to the court hearing without lawyers, the indictment is being read out without anybody from the defence, with the participation of the judge and four representatives of the public prosecution.

Before the hearing commenced, Yulia Tymoshenko announced that she was planning to engage four lawyers, two of them from the American firms BDO and Covington & Burling LLP. She said that they would also be representing her at the European Court of Human Rights to which she has already made an application.

She had said that the names of her Ukrainian lawyers would be announced in the courtroom however did not do so due to the later ruling by the judge.