Tymoshenko’s Lawyers plan to ask for the indictment to be read againMr. President, Time to Stop Digging Yourself Into a HoleProsecution: Tymoshenko signed “economically unfavourable and unacceptable” gas deals with RussiaJudge refuses to reinstate live broadcast of Tymoshenko trialTymoshenko’s Lawyer banned from her entire trialHuman rights lawyer Tymoshenko trial turning into farceTymoshenko once again removed from her own trialArkady Bushchenko to represent Yulia Tymoshenko in the European CourtStudy finds Tymoshenko case viewed as political repression and personal revengeYet another criminal case against Yulia TymoshenkoJournalists prevented from covering Tymoshenko trialBerkut uses force against journalists during Tymoshenko trialTymoshenko expelled from courtroom, Deputies manhandledEuropean Commissioner calls on Verkhovna Rada to use international experience in legislative workNew criminal investigation against TymoshenkoJudge is in a hurry with Tymoshenko trialPolish Ambassador: Prosecuting opposition politicians can lead to bad habitsTime to name names, Ms ClintonWhile Lutsenko criticized the court, his property was being frozenUS State Department: On the Prosecution of Ukrainian Opposition Leaders
• Topics / Politics and human rights
• Topics / The right to a fair trial 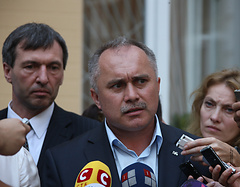 Former Defence lawyer for Yulia Tymoshenko, Serhiy Vlasenko has invited journalists to be present during the new lawyers’ reading of the “gas charges” material on Thursday.

As reported, on Monday the presiding judge in a court trial being followed very closely in Ukraine and abroad, Judge Kireyev banned Serhiy Vlasenko from acting as defence lawyer, leaving Ms Tymoshenko for some time without any defence lawyer.  Kireyev then gave two new lawyers: Oleksandr Plakhotnyuk and Mykola Syry three days to familiarize themselves with the case. The material contains around 5 thousand pages.

At a press conference on Wednesday, Serhi Vlasenko stated:

“I am authorized by my colleagues to invite all members of the media on Thursday from 9 a.m. to 6 p.m. to come to the Pechersky District Court  and be present during the reading by Tymoshenko lawyers of the criminal file material. In order to avoid any later insinuations on that score”.

“If anyone feels like it, any journalist can at the same time, beginning from 10 a.m. up till 18.00, come to 15 Turivska St (the Batkivshchyna Party Office) and take part in the process of reading the fie material”.

“If anyone would like to, you are most welcome”.

Lawyer for Tymoshenko, Mykola Siry in his turn expressed regret that the court had provided Tymoshenko’s new lawyers only three times to read the material.

The other new lawyer Oleksandr Plakhotnyuk said that the former Prime Minister’s defence were planning to ask the court for additional time to read the material.

“We will obviously be spending all this time reading the material. But believe me, you can’t achieve the impossible and we won’t have time to read all the material”, he said.

The files were presented at the press conference and the lawyers repeated that they contain around 5 thousand pages.