Tymoshenko’s lawyers invite press to try the court’s deadlineTymoshenko’s Lawyers plan to ask for the indictment to be read againMr. President, Time to Stop Digging Yourself Into a HoleProsecution: Tymoshenko signed “economically unfavourable and unacceptable” gas deals with RussiaJudge refuses to reinstate live broadcast of Tymoshenko trialTymoshenko’s Lawyer banned from her entire trialHuman rights lawyer Tymoshenko trial turning into farceTymoshenko once again removed from her own trialArkady Bushchenko to represent Yulia Tymoshenko in the European CourtStudy finds Tymoshenko case viewed as political repression and personal revengeYet another criminal case against Yulia TymoshenkoJournalists prevented from covering Tymoshenko trialBerkut uses force against journalists during Tymoshenko trialTymoshenko expelled from courtroom, Deputies manhandledEuropean Commissioner calls on Verkhovna Rada to use international experience in legislative workNew criminal investigation against TymoshenkoJudge is in a hurry with Tymoshenko trialPolish Ambassador: Prosecuting opposition politicians can lead to bad habitsTime to name names, Ms ClintonWhile Lutsenko criticized the court, his property was being frozen
• Topics / Politics and human rights
• Topics / The right to a fair trial

Tymoshenko’s Lawyer: How do you formulate a crime that didn’t exist? 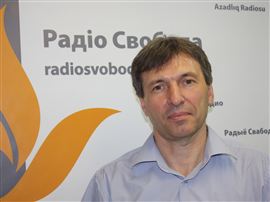 In an interview to the Radio Svoboda Ukrainian Service, Mykola Siry, one of Yulia Tymoshenko’s new lawyers spoke about the trial and the demands on all those involved.  He told the interviewer (and well-known journalist) Vitaly Portnikov that the indictment in the “gas case” against the former Prime Minister and leader of the opposition Batkivshchyna Party has not provided the main element – the fact of a crime. He asserts that this is because the trial is about politics, not law..

He was asked how the situation was developing and how he predicted it would develop, as well as whether he had been provided with the physical opportunity to read the file material.  [As reported here, Judge Kireyev last Monday banned Serhiy Vasylenko from acting as Yulia Tymoshenko.  He agreed to Mykola Siry and Oleksandr Plakhotnyuk representing her but gave them only 3 days to read the material, which the defence says comes to some 5, 000 pages. – translator].

“One of the features of this trial is the extremely high pace which it has been given.  Such speed was in the first place set by the investigators. They over-accelerated the investigation into this case.

Then the baton was handed to the court and the court excessively speeded up all court proceedings. For example, yesterday the hearing went on for 12 hours, from 9 a.m. to 9 in the evening. It would be difficult to find any need for such a tight schedule of work”.

“I spoke with National Deputy Serhiy Vlasenko who was also previously carrying out Yulia Tymoshenko’s defence in this trial. He said that he gets the impression that the judge is not dealing with any other cases at all, that he has no other proceedings, that’s he’s so fully working with this material.

Yes, in general Ukrainian judges have a lot of cases they deal with.  Say around 50-60 cases a month. And in comparison with the usual load we see that Judge Kireyev has been freed of any additional load. That is, he has, so to speak, been given one task – to run the hearings specifically in this case. “

He added that if Judge Kireyev had a normal load, they would expect him to be more attentive to the lawyers’ need to read the material and prepare for the next hearing.

Ms Tymoshenko and other members of the Batkivshchyna, and many people in the media say that this is a political trial. How is it for you as a lawyer, is it easy to work on a case which is considered political, and with the defendant herself?”

Mr Siry asserts that while it is not a simple matter to work on any case where a person is accused of a serious crime, the proceedings on Thursday made it clear that this was a political case.  He says that Ms Tymoshenko and her lawyers tried for two and a half hours to get the court to name the event of the crime, to clearly articulate what the criminal actions that she is charged with constituted.

“For 2.5 hours the Judge himself, as well as with the help of the Prosecutor, tried to formulate the event of the crime – and did not manage it. For us as lawyers it’s clear why it hasn’t been formulated – because there is no event of a crime. And if there isn’t any in reality then obviously it can’t be formulated. And those over 70 pages of text in which the so called charges are set out, the Prosecutor’s indictment, is in truth a kind of novel on a free theme. From the jurisprudence point of view, the indictment lacks the main thing – there is no event of a crime, no element of a crime, no defined criminal intent, there is no definite criminal motive, no definite damage, in legal terms correctly defined. If this is the case, then the given prosecution is indeed political, it is not juridical.

That incidentally is what we’re talking about. Because, as far as I remember, specifically yesterday (Thursday – translator) (for me this is an important point in this trial, positively even the turning point) . Ms Tymoshenko several times asked the Judge what exactly constituted her personal interest in arranging specifically that contract which was drawn up. …. Nobody could formulate to what extent specifically Ms Tymoshenko, if one takes away political considerations, say, had an interest in that document being signed.”

Mykola Siry did not comment further on this, nor on some other speculation put forward.

He stressed that Ms Tymoshenko was to a large extent defending herself and pointed out that for whole periods of time she had been without lawyers during the proceedings.

He also stresses that at the end of 2008 and beginning of 2009, gas was cut off not only for Ukraine, but for all of Ukraine. “All Europe and Ukraine asked for some kind of positive resolution to be found as soon as possible in this conflict between the Ukrainian and Russian sides.”

From a much longer interview at http://radiosvoboda.org/articleprintview/24274821.html

For the sake of balance, we could direct readers to a response at http://kyivpost.com/news/opinion/op_ed/detail/109128/ from Party of the Regions National Deputy Inna Bohoslovska to the letter published here