Tymoshenko’s Lawyer: How do you formulate a crime that didn’t exist?Tymoshenko’s lawyers invite press to try the court’s deadlineTymoshenko’s Lawyers plan to ask for the indictment to be read againMr. President, Time to Stop Digging Yourself Into a HoleProsecution: Tymoshenko signed “economically unfavourable and unacceptable” gas deals with RussiaJudge refuses to reinstate live broadcast of Tymoshenko trialTymoshenko’s Lawyer banned from her entire trialHuman rights lawyer Tymoshenko trial turning into farceTymoshenko once again removed from her own trialArkady Bushchenko to represent Yulia Tymoshenko in the European CourtStudy finds Tymoshenko case viewed as political repression and personal revengeYet another criminal case against Yulia TymoshenkoJournalists prevented from covering Tymoshenko trialBerkut uses force against journalists during Tymoshenko trialTymoshenko expelled from courtroom, Deputies manhandledEuropean Commissioner calls on Verkhovna Rada to use international experience in legislative workNew criminal investigation against TymoshenkoJudge is in a hurry with Tymoshenko trialPolish Ambassador: Prosecuting opposition politicians can lead to bad habitsTime to name names, Ms Clinton
• Topics / Politics and human rights
• Topics / The right to a fair trial

Independent: Trial puts Tymoshenko back in the spotlight 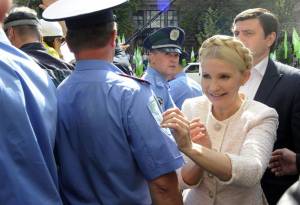 Yulia Tymoshenko, seen outside the Pechersk District Court in Kiev, says the case against her involves policy matters from when she was in government, not criminal behaviour

Monday, 25 July 2011  Ukraine’s Orange Revolution fizzled out, but now it is getting a second airing – in a Kiev courtroom. Oliver Poole reports

As the land of Nikolai Gogol and the adopted home of Anton Chekhov, Ukraine has long been enthusiastic about its playwrights. But the theatre now gripping the country has not unfolded on the stage but in a courthouse in the capital, Kiev.

The setting is Pechersk District Court where Yulia Tymoshenko, the country’s former prime minister and one of the leaders of the Orange Revolution, is being prosecuted for allegedly abusing her power of office.

The drama, which resumes this morning, finished its first act on Friday when – after days of wrangling and increasingly chaotic courtroom scenes – the 50-year-old opposition leader finally heard the charges against her. She pleaded not guilty and issued an angry rebuke to the courtroom: "This criminal case was made up on the President’s order, " she cried, her trademark blonde braid wrapped around her head. "The criminal charge is something to be ashamed of."

President Viktor Yanukovych suffered a bitter blow during the Orange Revolution, which saw his 2004 election victory declared fraudulent and annulled by the Supreme Court amid huge street protests. But in a remarkable comeback, Mr Yanukovych beat Ms Tymoshenko in elections in February 2010, and Ms Tymoshenko and her lawyers now claim that the trial is payback, and part of a broader crackdown on opposition politicians ahead of next year’s parliamentary elections.

Supporters have filled the courtroom shouting "Shame! Shame!". Ms Tymoshenko herself was ordered to leave after refusing to stand to address the bench and for calling the judge a "monster". The trial continued without her or her lawyers present to witness proceedings.

The government insists the case is part of a general crackdown on corruption. But the charges against her are unusual as, rather than alleging impropriety for personal gain, they centre on a gas deal with the Russian Prime Minister Vladimir Putin in 2009 which reportedly resulted in the Ukraine losing £118m. It is claimed that Ms Tymoshenko forced the then head of Ukraine’s state-owned gas company, Naftogaz, to sign the agreement with Russia’s Gazprom without consulting her government. Ms Tymoshenko questions why matters of policy have become a criminal case and points out that the deal was welcomed at the time by the European Union.

"We in the Ukraine had experience of living in the Soviet Union when there were no liberties at all, " she told The Independent. "That is why I must now fight for a county built on values: rule of law, freedom of speech, justice."

The trial has seen both the court and the prosecutors accused of a host of procedural violations, provoking stern warnings from the European Commission and the US State Department that they are now monitoring proceedings carefully.

Ms Tymoshenko and her advisers were given less than a week to read the 4, 500-page documents that outlined the prosecution case and her application for a trial by jury was refused. Her original lawyer had to resign after suffering heart problems due to the stress of handling the case.

Moreover, her legal team highlights how the case is not an isolated instance but, they argue, part of a co-ordinated assault on the opposition movement ahead of next year’s parliamentary elections. Eight members of the former government are under arrest and three others banned from leaving the country. The former economic minister gained asylum in the Czech Republic after being harassed by the Ukrainian authorities.

Yuri Lutsenko, the charismatic former interior minister, was arrested by armed security men shortly before New Year as he stepped out of his family apartment to walk his dog.

His family are candid about the physical effect of his time incarcerated in Kiev’s notorious Lukyanivska prison awaiting trial – an impact accentuated by a six-week hunger strike he undertook to try to get his case to court.

His brother Sergei Lutsenko said: "When I see Yuri he does not now look like the same man. His face is gaunt and we worry about his health all the time. The conditions are very bad. His cell is damp and mouldy."

As with Ms Tymoshenko, the charges largely focus on issues of political policy, not personal propriety. Key to them are the claims, which Mr Lutsenko denies, that he hired a driver who was two years over the pension age and that he permitted the police an unlawful day off.

When in office, he was involved in bringing a case against Boris Kolesnikov – a close ally of Ukraine’s richest man, Rinat Akhmetov – as well as Evgenii Kushnaryov, the former governor of Kharkov, and other high-ranking members of Mr Yanukovych’s circle. His brother believes this is why he has now been targeted. "The only opposition President Yanukovych wants is one in his image, " he said. "One he can tell what to say and what not to say."

But if the objective of the recent crackdown was to destroy Mr Yanukovych’s political opponents, its effect appears to have been just the opposite. Ukrainians were damning about the failure of the Orange Revolution’s leaders to deliver on their promises. Ms Tymoshenko’s governments were mired in allegations of political infighting and inappropriate behaviour, including by Mr Lutsenko, who allegedly attacked security guards while drunk at Frankfurt airport. After losing to Mr Yanukovych, Ms Tymoshenko could not even unify the opposition around her.

But now she is again able to portray herself as a victim of oppression and is a national figurehead once more, her face staring from myriad magazine covers.

Thousands of demonstrators have gathered outside the court to scream her name, and her Twitter account jumped to 23, 500 followers after she started tweeting live from the court.

Requests to interview President Yanukovych or a member of his office had received no response by the time The Independent went to press, but he made clear, when interviewed in Strasbourg recently, that the performance surrounding the Tymoshenko trial would be ended "quickly". Then, he added, people would be able to see "who is right and who is wrong and we can make conclusions".

If Ms Tymoshenko is found guilty, she faces up to 10 years in jail and would be disqualified from taking part in parliamentary elections next year and a presidential poll in 2015. If not, the conclusion must be that Mr Yanukovych will face a far more dangerous political opponent than if the drama now unfolding at Pechersk District Court had never taken place.

* 23 November, 2004: Viktor Yanukovych, right, the prime minister, is declared winner of the presidential election. However, observers report widespread vote rigging and the result is also tainted by the poisoning of opposition candidate Viktor Yushchenko.

* 3 December, 2004: The victory is annulled by the Supreme Court after huge protests on the streets of Kiev – dubbed the ’Orange Revolution’. The re-run was won by Viktor Yushchenko.

* 4 February, 2005: Yulia Tymoshenko, nominated by President Yushchenko, is approved as Prime Minister. She is later sacked after complaints about government corruption, before being reappointed in 2007.

* 14 February, 2010: Mr Yanukovych declared President after staging a remarkable comeback, beating Ms Tymoshenko by 3.45 percentage points. Observers said there were no major concerns with the vote but Ms Tymoshenko refused to accept the result.