Court adds Tymoshenko’s notes on Twitter to the prosecution caseTymoshenko to ask specialists whether the Judge explained what she’s charged withIndependent: Trial puts Tymoshenko back in the spotlightTymoshenko’s Lawyer: How do you formulate a crime that didn’t exist?Tymoshenko’s lawyers invite press to try the court’s deadlineTymoshenko’s Lawyers plan to ask for the indictment to be read againMr. President, Time to Stop Digging Yourself Into a HoleProsecution: Tymoshenko signed “economically unfavourable and unacceptable” gas deals with RussiaJudge refuses to reinstate live broadcast of Tymoshenko trialTymoshenko’s Lawyer banned from her entire trialHuman rights lawyer Tymoshenko trial turning into farceTymoshenko once again removed from her own trialArkady Bushchenko to represent Yulia Tymoshenko in the European CourtStudy finds Tymoshenko case viewed as political repression and personal revengeYet another criminal case against Yulia TymoshenkoJournalists prevented from covering Tymoshenko trialBerkut uses force against journalists during Tymoshenko trialTymoshenko expelled from courtroom, Deputies manhandledEuropean Commissioner calls on Verkhovna Rada to use international experience in legislative workNew criminal investigation against Tymoshenko
• Topics / Politics and human rights
• Topics / The right to a fair trial

Tweets Made Evidence In Tymoshenko Trial 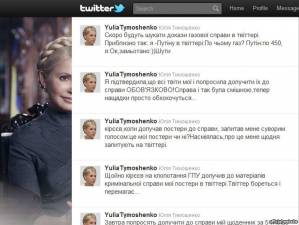 Beleaguered former Ukrainian Prime Minister Yulia Tymoshenko has embraced new media with a passion. Armed with her iPad, she keeps all of her 27, 328 Twitter followers well abreast of the shenanigans that take place in the Pechersk Regional Court, where she is on trial for abuse of power and corruption.

And that does not sit well with the authorities, particularly young presiding judge Rodion Kireyev, who doesn’t seem to get much respect in his courtroom. Yesterday, he admitted Tymoshenko’s tweets as evidence in the case. The reason: inappropriate language with respect to the court.

The gallery regularly breaks out in applause or shouts of "shame" or "lies, " with judge Kireyev seemingly powerless to stop them. That’s why he’s got a special forces outfit called "Griphon" helping him out. Yesterday, they physically forced out some of Tymoshenko’s ardent supporters, MPs who are part of her faction in parliament. Their approach is the ancient Roman legionnaire’s wall; they surrounded the group of undesirables and literally pushed them out.

• July 25: The Judge, like a wounded bird is shouting at people in the courtroom for applauding the statement about his removal. He is threatening to have everyone removed :))) (Tymoshenko’s lawyers presented a motion for Kireyev’s removal from the case for incompetence.)

• July 25: I have confirmed that all the tweets are mine and that they should absolutely be part of the case. This case was already comical, now our ancestors will have something to laugh about too.

• July 25: They are asking in Russian Twitter if there is a Yanukovych personality cult. There is a cult. But there is no personality.

• July 25: Soon they’ll be looking for evidence in this gas case on Twitter. Something like this: I to Putin: How much for gas? Putin: 450. I: that’s settled. ;))) Joke.
• Kireyev has announced a legal masterpiece: the absence of a crime is no reason for closing a case. They say that Yanukovych sleeps with a stuffed Kireyev doll.

• July 18: This marionette in judge’s robes has given my new lawyers 3 days to acquaint themselves with 5, 000 pages of prosecution materials :)))

• July 2: I understand from this show that they want me to stand before this "court" and call this "judge" "Your honor." Makes me think of Paul Sheuring’s film "The Experiment."

• June 30: The Procurator’s Office announced that all my property is arrested. Does this apply to dogs? Can they be walked or are they, like me, not allowed to go anywhere?

• May 24: Today was a very difficult day. In the morning I was arrested, in the evening, after great pressure, I was released. Thank you for your support :) Tomorrow I’ll tell you everything.

Not all of Tymoshenko’s tweets are about her battles with the Ukrainian judiciary. She tweets a congratulatory note to Christine Legarde on her IMF confirmation, or to Portuguese Social Democratic Party leader Pedro Passos Coelho on the "excellent result in Portugal’s elections. EPP family getting stronger." She remembers the death of a promising politician a year ago, reacts to the death of Yelena Bonner. She finds time to go to concerts:

• June 3: I’m going to concert by the legendary Braty Hadiukiny. In the 1990s they were a breakthrough to freedom, their music was the pulse of a young independent nation.

• May 26: I just went to the Alessandro Safina concert. What a beautiful voice!!! Everyone should go hear him. I took a small break from the prosecutors.

Since she launched her Twitter account five months ago, Tymoshenko has become one of the most active tweeters in the country. Twitter provides her with a platform to get her message out, and it allows her to give her nearly 30, 000 followers a blow-by-blow account of the court’s proceedings.

Tymoshenko fully understands the power of new media, and she uses it effectively.

"Soon they’ll open a criminal case against Twitter. They’ll put the iPad under a travel ban. They know that 140 symbols are more powerful than 140 Griphon officers, " she tweeted yesterday.