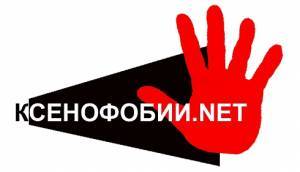 The caption reads xenophobia.net, also meaning "No to xenophobia!"

Volodymyr Batchaev in his latest article asks whether the hate speech on police websites is merely the result of legal illiteracy, or actual encouragement for the public to discrimination.

On 20 June this year a court in Simferopol found the leader of the Cossack Society “Sobol”, Vitaly Khramov guilty of incitement to inter-ethnic enmity under Article 161 of the Criminal Code and imposed a fine of 23 thousand UAH.

The author points out that this is no ordinary event for Ukraine since from 2004 to the beginning of April 2011 there had only been 27 crimes qualified under this article.  [Article 161 envisages punishment for deliberate actions aimed at inciting ethnic, racial or religious enmity and hatred, at denigrating a person’s ethnic honour and dignity or causing offence with regard to religious beliefs. One of the problems lies in the difficulty of proving intent to incite enmity. - translator]

Batchaev says that the Ministry of Internal Affairs [MIA] claims that this is due to the police having it all under control and using preventive measures against racism and discrimination.  He quotes Viktor Ratushnyak, Head of the Department of Public Control as saying that prevention and solving of racially motivated crimes was under the special control of the MIA management.  That assurance was given to the Pakistan Ambassador. Other similar claims have been made to members of the European Commission against Racism and Intolerance.

Unfortunately, he notes, such reassuring phrases are very far from the truth. They also encourage the authorities to not take active steps to counter racism and discrimination.

While NGOs have been warning of an escalation in cases of xenophobia over recent years, he says, this has traditionally not been a centre of attention for those in power.  “With the help of the law enforcement bodies they assess the problem in a one-sided manner, using exclusively statistics pointing to a small number of criminal investigations under Article 161 of the Criminal Code and seeing that as evidence that all is well in this area.”

Nobody thinks about another interpretation – that the statistics demonstrate that the law enforcement system in Ukraine is not capable of applying this article.

While the article is difficult to apply, he sees the main problem in the fact that racially motivated crimes simply go unnoticed by the police. Maybe this is due to negligence or insufficient professional skills, possible in the psychological adaptation of the law enforcement officers to everyday manifestations of ethnic intolerance. “Paradoxical as it may seem, it is very often the MIA itself that commits violations which not only demonstrate the existence of ethnic profiling in the police force, but also have elements of the crime set out in Article 161 of the Criminal Code.”

Despite such clear and unequivocal formulation, the MIA which is responsible for protecting the law, quite often posts publications on its official websites with unconcealed denigration or even calls to discriminate against, for example, the Roma.  The main message in the publications is standard for the police: “Beware – gypsies!”

On 4 July this year the Yalta Department of the MIA published an article about the Roma under the title “Do not let into your flat under any pretext!”  The article says that the police have information about a “group of Gypsies “of Slavonic appearance”” and claims that some women are deliberately dying their hair light, not wearing bright colours etc.

On 19 July there was another article “Swindling through hypnosis” which tells a story of two vendors at a market only discovering the loss of money after two women left the market. The article ends with the conclusion “law enforcement officers realized immediately that this method could be the work of Gypsies who have long been known for their ability to hypnotize people”.

The author cites another opus from the same MIA Department entitled “My Home – My Castle” with no less offensive words with a similar message.

Similar “explanatory work” can be found on the Volyn Regional MIA website where the law enforcement officers go to great lengths to describe what happens to people who are not vigilant, with the same ethnic group being described in highly derogatory fashion. The following is just part of the text the author cites:

“law enforcement officers have great difficulty countering Gypsy swindling. Furthermore, CID officers don’t know either Gypsy customs or their language. As well as that, it is extremely hard to prosecute Gypsies. They’ll either ill, or pregnant, or underage, or disappear completely in an unknown direction. The police and press have tired of warning gullible people to keep away from these deceitful people and not have any contact with them.”

The article with offensive title and content which appeared on the Vinnytsa regional MIA site on 28 April differs only in also adding details about one “of their traditional occupations being begging”.

A similar article appeared on the website of the Kyiv MIA, while even the main MIA website does not avoid such overtly negative remarks about Roma people.

The author says that he will assume that the MIA is not waging its own hate campaign against one ethnic group. He can believe that the various departments – and his list of offensive materials is by no means exhaustive – simply want to warn people about certain types of crimes. They have, however, done it thoughtlessly and unprofessionally “and legislation does not allow for protection of the rights of one group of the population at the expense of infringements of the rights of another’s”.