Tweets Made Evidence In Tymoshenko TrialCourt adds Tymoshenko’s notes on Twitter to the prosecution caseTymoshenko to ask specialists whether the Judge explained what she’s charged withIndependent: Trial puts Tymoshenko back in the spotlightTymoshenko’s Lawyer: How do you formulate a crime that didn’t exist?Tymoshenko’s lawyers invite press to try the court’s deadlineTymoshenko’s Lawyers plan to ask for the indictment to be read againMr. President, Time to Stop Digging Yourself Into a HoleProsecution: Tymoshenko signed “economically unfavourable and unacceptable” gas deals with RussiaJudge refuses to reinstate live broadcast of Tymoshenko trialTymoshenko’s Lawyer banned from her entire trialHuman rights lawyer Tymoshenko trial turning into farceTymoshenko once again removed from her own trialArkady Bushchenko to represent Yulia Tymoshenko in the European CourtStudy finds Tymoshenko case viewed as political repression and personal revengeYet another criminal case against Yulia TymoshenkoJournalists prevented from covering Tymoshenko trialBerkut uses force against journalists during Tymoshenko trialTymoshenko expelled from courtroom, Deputies manhandledEuropean Commissioner calls on Verkhovna Rada to use international experience in legislative work
• Topics / Politics and human rights
• Topics / The right to a fair trial

Officers from the court police unit “Gryfon” drove out journalists and National Deputies from the Pechersky District Court courtroom where the trial is taking place of former Prime Minister and leader of the opposition Batkivshchyna Party, Yulia Tymoshenko.

An UNIAN correspondent said that the police, without any warning began moving the benches that the journalists were sitting on so that they almost fell.

UNIAN reports that the only people left were Ms Tymoshenko, her defence lawyer Oleksandr Plakhotnyk, the court secretary and about ten Gryfon officers.

Ukrainska Pravda reported through the afternoon that an UNIAN journalist’s hand was injured during the brawl that developed.  This began after Judge Kireyev ordered all present to be removed. Before that the National Deputies had begun shouting “Shame!” that Yulia Tymoshenko had not been given time to look for lawyers and the judge was already calling the first witness.

During the scuffle Gryfon officers used foul language, twisted the arms of National Deputies and refused to show their ID. The Deputies began swearing in response.

An MIA spokesperson, V. Dmytrenko stated that two Gryfon officers had been injured by the National Deputies and claimed that they had been hospitalized.  When asked by journalists why around six Special Force Berkut officers were near the court at around 17.15 he refused to give any commentary regarding their presence.

He was also unable to say how many National Deputies had been injured during the scuffle. One of the National Deputies, Yury Prokopchuk from BYUT- Batkivshchyna says that he was injured and that he plans to demand that the Prosecutor initiate criminal proceedings against the Gryfon officers.

From reports at UNIAN and Telekritika 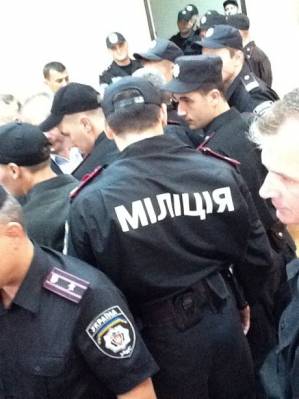