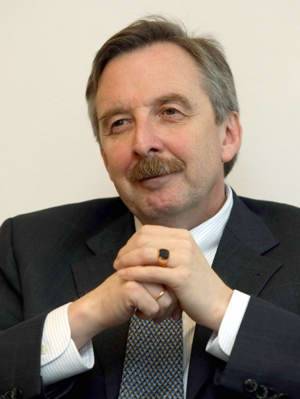 At the end of a press conference announcing new visa requirements, Dr. Hans-Jürgen Heimsoeth, Germany’s Ambassador to Ukraine agreed to reply to one political question. He was among the ambassadors whom the Prosecutor General invited to a meeting in order to give an explanation about the situation with Yulia Tymoshenko’s detention. There were consequently a lot of people who wanted to hear from the German Ambassador what they had been told, what explanation they’d been given. The Prosecutor’s Office explained the meeting as being because of the enormous publicity which the criminal prosecution of Yulia Tymoshenko had received in the world.

How can the Ukrainian government get out of this situation in order to prove the sincerity of their intentions, that they are fighting corruption and not using selective justice and trials against their political opponents, as many experts within the country and abroad think?

I will not say much regarding the details or assessing what is happening in Ukraine. I can only say that the German Federal Government, the German Chancellor’s Department, as well as the Ministry of Foreign Affairs are closely following this trial.

We take Ukraine’s wish to get closer to the European Union very seriously. We therefore treat European standards which Ukraine also wants to achieve very seriously. I’d just like to say that the statement issued by spokesperson for the Federal Ministry of Foreign Affairs on 4 January 2011 has in no way lost its relevance.  I would suggest that those who may not remember it read it”.

The aim of President Viktor Yanukovych to bring Ukraine into the EU is praiseworthy and on that path to intensively fight corruption in his own country. However the names of those against whom charges have been laid create the impression that Ukrainian justice is deliberately and politically directed against former members of Tymoshenko’s government. If such an impression becomes more fixed, this could be a serious impediment to Ukraine’s moves closer to the EU”

Asked by journalists whether he meant that this statement should be read once again by those working in the Prosecutor’s Office or the President’s Administration, Dr Heimsoeth said “as well as members of the journalist corps”.