Economist: Justice in Ukraine: Democracy on trialGerman Ambassador reiterates warning about consequences of selective justiceTymoshenko trial: tweets included, not witness’ documentLawyers’ Association rejects accusations against Tymoshenko’s lawyerJudge rejects Prosecutor’s request to arrest TymoshenkoTymoshenko trial: Gryfon police officers use foul language and force to clear the courtTweets Made Evidence In Tymoshenko TrialCourt adds Tymoshenko’s notes on Twitter to the prosecution caseTymoshenko to ask specialists whether the Judge explained what she’s charged withIndependent: Trial puts Tymoshenko back in the spotlightTymoshenko’s Lawyer: How do you formulate a crime that didn’t exist?Tymoshenko’s lawyers invite press to try the court’s deadlineTymoshenko’s Lawyers plan to ask for the indictment to be read againMr. President, Time to Stop Digging Yourself Into a HoleProsecution: Tymoshenko signed “economically unfavourable and unacceptable” gas deals with RussiaJudge refuses to reinstate live broadcast of Tymoshenko trialTymoshenko’s Lawyer banned from her entire trialHuman rights lawyer Tymoshenko trial turning into farceTymoshenko once again removed from her own trialArkady Bushchenko to represent Yulia Tymoshenko in the European Court
• Topics / Politics and human rights
• Topics / The right to a fair trial

The Internet publication Ukrainska Pravda writes that it has by chance received confirmation that the President’s Administration is directly exerting influence on the Tymoshenko case. It is not only in contact with witnesses, but is also actively circulating information about their testimony.

Serhiy Leshchenko explains how they came upon their evidence.

On Thursday Ukrainska Pravda issued a news report about the testimony given to the Tymoshenko trial by former Deputy Prosecutor General Tetyana Kornyakova. Following the evidence the day before from Yury Prodan, their headline read: “Yet another witness for the prosecution comes out on Tymoshenko’s side”.

Shortly after the news item was posted, they received an email which attached a Word document with the title: “The Internet publication Ukrainska Pravda deliberately distorted the statements from former Deputy Prosecutor General Tetyana Kornyakova”.  The text goes on to state that Ms Kornyakova said in her testimony that the Prime Minister’s directives cannot be considered those of the Cabinet of Ministers, which supported the prosecution.  “Tetyana Kornyakova is outraged by the speculative approach to facts by the journalists and demands that Ukrainska Pravda immediately apologize and correct their headline.”

Ukrainska Pravda was curious about the source of this email.

“Any Word document can indicate its origin, for example, the computer on which it was created”. Few know this, the author explains,   however it was thanks to similar specific features of the text editor that Ukrainska Pravda was at one time able to prove that the “temnyky” [the instructions on what to write and how] in Leonid Kuchma’s days were produced by the President’s people.

Serhiy Leshchenko goes on to explain how to check – by opening the document and while it’s open, checking “Properties” [under “File”].  He also shows the screen shots that appear.  From these it can be seen that in the line for Organization the letters STPU appear on.  This is the abbreviation for the President’s Administration.

Over recent months Ukrainska Pravda has received emails in response to information requests submitted under the new Public Information Act.   Those letters, with the signature of the Head of the Central Department for Access to Public Information, Denis Ivanesko, were also prepared on a computer with STPU under “Properties”.

The author notes that the press release was sent to many media outlets.  The Deputy Chief Editor of Kyiv Post, Kateryna Gorchinska, for example, confirmed that they had received the same press release and that the abbreviation STPU could be found by checking “Properties”.

Denis Ivanesco was not prepared to comment since this did “not fall within his competence”.

It is not clear from the article whether an attempt was made to contact Tetyana Kornyakova. The author mentions only that according to information on the website of the Ministry for Fuel and Energy, she is now the Deputy Minister in this ministry.

Yulia Tymoshenko asked on Friday to have the material published by Ukrainska Pravda included in the file material. 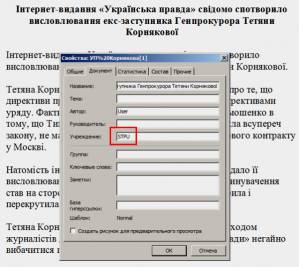