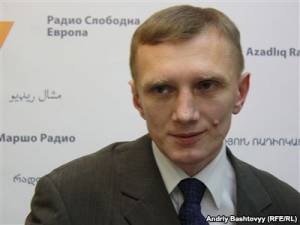 Kharkiv Human Rights Group Anti-Torture Programme Coordinator Andriy Didenko spoke to Roman Skrypin on Radio Svoboda about his own experiences and the situation with penal institutions in Ukraine.

Andriy Didenko is aware that there are situations where only the individual can defend his or her rights. He himself spent 8 years imprisoned, won a huge number of court cases, only not in his own case. His work in the human rights field is impelled in part by the fact that he knows the situation and what needs to be done.

In Ukraine, he says, a person who ends up before the courts is doomed. The whole system is built that way.  If he is remanded in custody, ending up in a SIZO [pre-trial detention centre], that’s it and he won’t be released.

On the deployment of a Special Forces unit at Penal Colony No. 89 in Dnipropetrovsk on 5 July

“I arrived at No. 89 on the invitation of the then Head of the Department, Babets, on 5 July. We had information that a large number of prisoners had been beaten. I arrived and unfortunately did not get into the actual penal institution.

I don’t actually know why. There was a Prosecutor’s instruction to allow me into the colony. The Acting Head of the Colony came out and said that he could admit me but only to those suffering from tuberculosis. I told him that I was not interested in those with tuberculosis, but in certain specific prisoners. He said that unfortunately he couldn’t let me in.

He was asked about the conditions generally in SIZO and penal institutions, and whether the things that he talks about in the Dnipropetrovsk colony happen often

“Why did I go there at all? Why was I in Dnipropetrovsk?  It was because we were dealing with the deployment of a unit of Special Force Officers from the State Penitentiary Service. It is called inter-regional but that’s something else. The Special Unit is basically illegal with [registration of the order for] the existence of the special unit having been cancelled by the Ministry of Justice in 2008”

The whole point is that despite the Ministry’s action, the unit still exists, and prisoners are beaten, intimidated.

This, he says, is always the case where the special unit is deployed. The latest cases have been in Dnipropetrovsk and Simferopol. He points out it is virtually impossible to follow these events properly and that even though Ukraine ratified the Optional Protocol to the UN Convention against Torture [OPCAT] in 2006, it has yet to fulfil its obligation to provide a national preventive mechanism

The interviewer commented that Valeria Lutkovska from the Ministry of Justice had been in their studio and said that the government does react, that it was good that he had reported it, and so forth.  Yet prisoners are beaten, with a special unit existing, and Didenko is forced to run around, sounding the alarm. He asks if the government is doing anything in this direction and whether we are talking about the system of punishment and execution of sentences, or effectively a system of torture in Ukraine.

Andriy Didenko notes that thanks to Valeria Lutkovska a third attempt at a draft law on implementing OPCAT is being drawn up and discussed. The first draft law on introducing a national preventive mechanism was not introduced because there was no money. The second would have extended the powers of the Human Rights Ombudsperson to cover this area.

The third variant involves transitional provisions with a mechanism under the President’s Administration capable of visiting penal institutions etc.

Can you recount your own memories or impressions about what happens to a person when he ends up behind bars?

“The main problem, in my opinion, is that a person who ends up behind bars is not protected, because information about him does not become public. That is very important. “

He says that the torture and inhuman treatment begins at the very outset, at the stage at which there is no protocol of detention, no records.

He notes that a public survey carried out by the Kharkiv Institute of Sociological Research together with the Kharkiv Human Rights Group suggested that just in the police acts of unlawful violence take place every 40 seconds. This is without mentioning all the violations in penal institutions.

He adds that when we speak of violence, it is not necessarily physical – psychological pressure can also be applied.

He gives the example of a young girl brought to a police station, barraged with questions by 6 CID officers.  The pressure is enormous and the protocol should mention that there were so many officers at the interrogation, but it doesn’t.

Torture takes place in the main where a person is not officially recorded, when he doesn’t officially exist.  Later a lawyer has access and the case is passed on to the investigators.

The interviewer returned to the situation in SIZO and penal institutions, trying to gauge how such cases as deployment of officers who beat up prisoners can happen.

Didenko points out the case of Davidov and others v. Ukraine over the mass beating of prisoners in 2001-2002 at the No. 58 Izyaslav Penal Colony. The European Court of Human Rights found that there had been a violation of the prisoners’ rights and torture.  He notes that for maybe the first time, the Court actually came themselves to carry out their own investigation. The Judgement names those likely to have been implicated.

And yet, he says, the situation has not changed, and the special unit is still use, very actively in fact, for beatings of prisoners.

The interviewer points out that the Department for the Execution of Sentences [the Department] denies the existence of any special unit.  Andriy Didenko says that maybe it doesn’t [officially] exist, but it works alright, and prisoners are beaten.  Asked, he confirms his view that they are beaten for no reason.

Asked what the point is, he says to beat and intimidate. He believes the Department’s philosophy is not about prisoners being reformed, but about them being beaten and cowered.. The change of name to the State Penitentiary Service has not changed this philosophy. It is not interested in trying to change a prisoner’s attitude to the crime.

Do those in power know what is going on?  Why does the system remain totalitarian in essence?

It is the single state structure that has not undergone any changes or reform. He says that at present a lot is said about plans for reform, but he doesn’t know how realistic that is.  He does say that he has met with heads of the department who do seem committed to change.

Abridged from the interview at: http://radiosvoboda.org/content/article/24282072.html