Taking action against inaction in Belarus 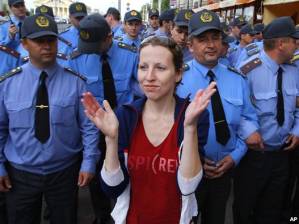 Opposition protesters in Belarus have impressed the world for weeks now as they come up with one imaginative way after another to demonstrate against the regime of President Alyaksandr Lukashenka.

Now it is the turn of the government to impress with its creativity. The cabinet of ministers has submitted to the country’s rubber-stamp legislature amendments to the law on demonstrations that would make it illegal for people to gather "for a previously planned action or inaction." In short, doing nothing in groups would be illegal in Belarus, if it were planned in advance.

Of course, the lack of a law against doing things like clapping one’s hands in public has not prevented the authoritarian regime from arresting dozens of demonstrators and sentencing many of them to jail terms of up to two weeks. But now it seems the government is concerned about the problem these convictions pose for the rule of law in the country and is moving to fill the lacuna.

Sadly, it appears that already the protesters may have proven too clever for the government. After all, one recent protest involved having demonstrators set the alarms on their cell phones to ring at precisely 8 p.m. Judges will be hard-pressed to decide if having your alarm go off  counts as either an action or an inaction.

The only result of passing this new law would be to make the government in Minsk look even more ridiculous than it already does. Needless to say, the bill has raised eyebrows at the Organization for Security and Cooperation in Europe (OSCE), which once again has had to remind Belarus of the "commitments" it has made to democratic development and human rights.

Laughable Legislation Is No Laughing Matter

This, of course, is not to in any way denigrate the courage of the protesters in Belarus. While the court proceedings in that country are farcical and this new legislative initiative is laughable, drawing the attention of the country’s KGB is no laughing matter. And spending even a few days in a Belarusian jail is not a joke. One Belarusian citizen, Alyaksandr Lyalikov, wrote about his interrogations in an essay published by RFE/RL:


"I began to come unglued. My body somehow began to melt in my chair. My heart was beating out of control -- I could see it pounding in my chest under my sweater. My palms were covered in a cold sweat. My mouth went dry, and my breath began to stink. My voice wavered and cracked. After more than three hours, the interrogation came to an end…. As they were showing me out the door, they handed me a summons for the next day and promised they would give me ’a good talking to’ if I continued ’with this farce.’"

As is always the case in totalitarian regimes, living according to one’s conscience takes an effort of bravery that very few can muster.

I was reminded of Lyalikov’s moving essay when I read the draft law on action and inaction. He ended his piece with these words:

"It is so hard to be a man in an unfree country. If you do nothing, you are a passive participant. If you try to do something, you are broken and turned into a traitor. It takes incredible courage and spiritual strength to escape this fate. Courage and strength that I lacked."

The innovative, Internet-driven protest actions dreamed up by the opposition in Belarus have turned this calculus on its head. They have opened up new avenues through which an increasing number of people are becoming willing to make a statement. Silence, applause, requesting (repeatedly) a popular song on state radio, the ringing of an alarm -- all of these and more have become ways to say "No" to a government whose oppression has become so evident that the opposition no longer even needs slogans or demands.

The proposed law outlawing organized action or inaction will not change the legal situation. Activists have been harassed, arrested, and jailed without a law and the regime will continue to do what it feels it must as the situation changes, regardless of what is written in the Criminal Code.

And such an artful law will certainly only spur on the fertile imaginations of the protesters: one can almost imagine them now asking themselves: "How shall I mock thee? Let me count the ways."

But there is almost a refreshing honesty in this effort to bring utter lawlessness under the scope of the rule of law. The penalty for inaction will be the same as the penalty for action. With it, Lukashenka is admitting that his government sees as enemies all Belarusians who either take action or don’t take action. The rest, I suppose, must be supporters.

Robert Coalson is a correspondent with Radio Free Europe/Radio Liberty. The views expressed in this commentary are the author’s own and do not necessarily reflect those of RFE/RL.